Previously in this space, I pointed out a few Andalusia-specific stories for some of our first-time visitors. These farm-centric works put Andalusia in a new light each time I revisit them. This time around, here are a few works that illuminate the city-side of Milledgeville. The town is frequently but a setting in O’Connor’s fiction, but a few works bring it out of “the darkness of the familiar.”

1. “The Partridge Festival”
For decades and decades, Milledgeville was a punchline to most of the state due to the sprawling campus of Central State Hospital, the world’s largest mental institution in its day, on the south side of town. “I’m going to Milledgeville” usually did not mean that one was heading off to college. Andalusia is located several miles away from the hospital campus and didn’t figure too prominently in the daily running of the farm, but it loomed very large indeed for the area’s economic prospects in its heyday. The protagonists of “The Partridge Festival” depart a farmhouse for a trip out to speak with a notorious gunman who took his revenge after being slighted by some of the townspeople at their annual fall fair.

2. “A Late Encounter with the Enemy”
Graduation day remains a big event, and now Georgia College holds a pair of them in an academic year. For many years, my own included, the college held its ceremonies on the green space known locally as “Front Campus” when the weather permitted (or, more memorably, even when it didn’t). The scenes at Sally Poker’s graduation (John Wesley’s mistake notwithstanding) are something that could easily have played out in any recent afternoon in early May; the organized chaos of getting hundreds and hundreds of people into a sea of chairs in the middle of Milledgeville is one not easily forgotten or missed.

3. “A Stroke of Good Fortune”
Though not quite the “alone-in-a-crowded-room” feeling one gets from big-city life in “Judgment Day,” “Stroke” has its own brand of claustrophobia as it survey’s Ruby Hill’s apartment complex. A story in which almost everyone knows everyone else’s story serves as a fairly nice metaphor for life in a town that, while large enough for many amenities, frequently does not let one hide. So too, I imagine our collegians have had several colorful metaphors for stair-centric dormitories.

4. “A View of the Woods”
Andalusia’s neighbors surprise our first-time visitors. A car dealership and a shopping center anchored by a certain ubiquitous big-box retailer are the “triumphs of Mr. Fortune,” as named by one of our volunteers. Piece by piece, Mr Fortune has sold off portions of his property to various business interests to the chagrin of his granddaughter’s husband. Andalusia, of course, has no intention of letting Mr Fortune triumph in the real world; indeed, I rather like our spot in town. As the business of Lake Sinclair moves south and the business of Milledgeville moves north to meet it, Andalusia can be a big, quiet, green solace in the midst of all the hustle around it.

With that sentiment, I hope Andalusia can be a little spot of peace and quiet for you in the midst of a holiday that can frequently be anything but. We’ll be open right up until the holiday, so drift in, stay a while, and maybe take a gift or two out of our shop (and those of our locally-owned neighbors). Cheers! 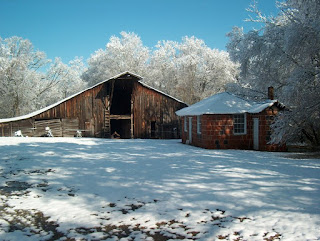 Daniel Wilkinson is an Instructor of English at Georgia College and the Bon Vivant at Andalusia. He wouldn't refuse the title of Man-About-Town if anyone would like to level it at him.
Posted by Andalusia, Home of Flannery O'Connor at 12/16/2016 03:00:00 PM