Christmas in the Bird Sanctuary

As Advent fades into Christmas, I meditate on how the transition to Andalusia—brought on by circumstances nobody willed or could control—would have felt. This post will ponder Flannery O’Connor’s Advent and Christmastide letters from those years. These both sadden and inspire me.

Sally Fitzgerald’s editorial note that separates 1949 from 1950 letters places O’Connor at home “for Christmas with her mother and for an operation to correct a floating kidney” (Habit of Being 19). Over the next three years, Advent and Christmastide continue to be fraught with physical challenges and overflowing with the self-examination that led to an acceptance of living at Andalusia and ultimately to something like self-abnegation.These are the letters Fitzgerald places in Part I: Up North and Getting Home. They are the letters that reach across all the intervening years by speaking to how we face unsought changes that we initially perceive as adverse ones.

Regina Cline O’Connor and Flannery did exactly that. At least, that is my reading of the records, as an only daughter who was blessed with health: The daughter had experienced flight from Milledgeville, the Bird Sanctuary, but periodically returned to the nest, battered in some way that was seldom immediately understood. Gradually, over these years, the permanence of that nest became clear.

Advent is intended to be a season of self-examination that culminates in hope, anticipation, and joy. Yet Christmas in the early 50s for both Miss Regina and her daughter seems annually to have been informed not only by things of the Spirit but also by urgent, physical conditions. The freedoms Flannery experienced in Connecticut become increasingly constrained and distant during this period, with the denouement beginning perhaps in late summer 1952 when the Fitzgeralds ship her Bible home and she acts on her passion for peacocks (43). Home now clearly means Andalusia, the place where your body and your Missal are.

In the initial interstices of uncertainty, O’Connor turns to her best friend from college, Betty Boyd Love, announcing in a letter from “Baldwin Memorial Horspital as usuel” on 23 December 1950 that she will be grounded in the “bird sanctuary for a few months.” At this point, she believes herself to be in “the horspital” for “AWTHRITUS” (22). Her usual good humor prevails, yet she concludes with “Write me a letter of sympathy (23).

Fast forward a year to Christmas 1951 when Flannery describes preparations on the dairy farm for the anticipated arrival of “a refugee family” before turning to her personal status. She expresses hope that she will yet return to Connecticut: “If the Lord is with me this next year I aim to visit you” (30). Both the material for her short stories and the hope for health coexist this Advent and Christmastide. On 2 May 1952, she writes Robert Lowell a fascinating sequence of statements: “I’ve been in Georgia . . . but I am going to Conn. . . . , I’m living with my mother in the country” (35). On 23 May, she again writes Betty Boyd Love.

Reading retrospectively, I know that Love will become more distant as her friend’s prominence as a writer increases. I admire Flannery for announcing and confronting her own demons when she writes earlier of the shock of marriage and now of the presence of a “stalking” child (36). I am in awe of her ability to deflect cultural assumptions that marriage represented success and literary fiction writing had no vocational equivalence to child bearing. I envy her ability to live in the bird sanctuary without reverting to childhood herself.

The Lord is willing for Flannery to make the trip to Connecticut, yet the circumstances of her time there in mid-summer 1952sound stressful. According to Sally Fitzgerald, that visit included a difficult relationship with two other guests, one from New York’s Fresh Air Fund and the other a refugee; a virus; and a conversation during which O’Connor “learned the true nature of her illness” (37).

By Christmastide, in a letter to the Fitzgeralds dated 30 December 1952, Flannery O’Connor emerges in a way that seems to me both slightly sardonic and hopeful, turning her mother’s encounter with an electric mixer and her own shingles to rhetorical advantage (50). In the days ahead, I will be meditating on that mixer and those shingles. 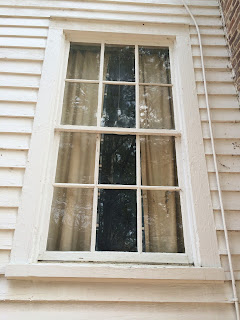 -- Elaine Whitaker chairs the Department of English and Rhetoric at Georgia College. Her photographs and blog are influenced by Ignatius of Loyola and Virginia Woolf. The window is the one behind which Flannery O’Connor may have read; the landscape is her view as it appears in Advent 2016.
Posted by Andalusia, Home of Flannery O'Connor at 12/23/2016 03:05:00 PM