Where Two or Three Are Gathered in Our Name

Walking through the south as a black person is often a troubling and perplexing task. Black culture is central to the lifeways of the south and yet ownership of the land itself has been denied to us. This denial means that the choice to “claim” the land is not always automatic. Often, the instinct is to avoid certain terrains because of the potential for trauma that they hold. Think, for instance, of all the Southern-born black writers like Richard Wright, Sonia Sanchez, and Percival Everett who move away and build a body of work largely about other locales. On the other hand, some, like Tayari Jones or Randall Kenan, continue to imagine the Southern landscape even when their bodies no longer reside in the south. Then, of course, there is Tina Ansa whose physical life and work remains firmly anchored to the land from which she came. So when you are invited to celebrate a piece of the Southern landscape, like Andalusia Farm, it can trigger any number of emotional or political responses. The farm with its acre-wide pond, strutting peacocks, tree-canopied walks, and whirring cicadas is emblematic of Southern ugly as much as Southern beauty. While the land itself is idyllic, the built environment reminds one of a way of life that few are nostalgic for, some are critical of, and many feel defensive about. This contradiction raises the question “Do I deny myself the pleasure of these familiar (in all senses of the word) southern landscapes, which gave rise to so much black genius?”

For at least one day in June of 2016, I, for one, chose to avail myself of the pleasure of the landscape and of my neighbors who had gathered on the Nail House deck behind the main house to share creative works in progress, paeans to childhood memories, and humorous recitations of nonsense in the monthly gathering that is Thursdalusia. Some days, I make different choices. This is one of the realities of living with the legacy of the “peculiar institution” of Southern slavery and the aftermath of systematic disenfranchisement—some days you feel up to making the effort to be in community with all of your neighbors and on other days the litany of assaults, past and present, on black humanity, dignity, and beauty mean that you simply cannot. On that day I was able and I’m pleased that I went. I’m even more pleased that I had the foresight to bring some friends with me—literally and literarily. Having my friend Bryan, a young black poet, there with me meant that I was not alone in my reading of the built environment or my sense of the significance of my choices of which poets and poems to share. We had a humorous conversation on the way over about the process of selecting what to read in “mixed company”; how our moods effect how protective or not we will be of others’ sensibilities. My choices that day, however, were probably more about my own sensibilities and the kinship I feel with certain black women poets. That day I read Black Arts Movement era selections from Nikki Giovanni and Carolyn Rodgers because I am drawn to their ways of asserting black femininity as powerful rather than fragile, vocal rather than silent, creative instead of repressive. And their shading of Standard English and Euro-American poetic convention! Choosing to share their language and their ideas was a clear assertion of my identity as a black woman. While all identity is relational, not all identities are subject to the kinds of assault that Black identity is, and that is why the gathering of “two or three” is crucial to manifest black claims to Southern land. 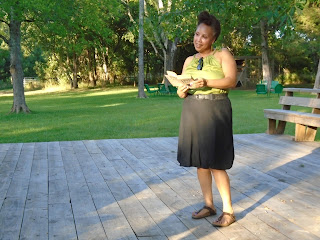 Beauty Bragg is Professor of English at Georgia College and a long-time resident of Milledgeville, Georgia.
Posted by Andalusia, Home of Flannery O'Connor at 9/23/2016 03:00:00 PM

What an intelligent post, defining how to view Andalusia from an informed and valuable perspective, explaining with great clarity how history can make some perceive the land--especially the Deep South--differently. I enjoyed and appreciated this post, because I'm not always sure where I should feel comfortable, but I have also found Andalusia to be quite hospitable.