I have been to Andalusia many times in the periods of my life when I lived in Milledgeville. My first visit was in the Spring semester of 2008, as part of a field trip for my upper level literature course with Dr. Bruce Gentry that focused exclusively on Flannery's writing. I remember well, sitting with my classmates on the pollen-laden screened porch, discussing her letters and essays. It was thrilling to imagine her presence, clacking away on the typewriter that still sat upon her bedroom desk.

My latest visit was no less thrilling, in a way. I attended the last Thursdalusia of the season on Thursday September 15th, which was also the night of dedication for the Little Free Library on the farm property. The evening was clear, yet muggy and sunny, summer still holding on. My nearly four year old daughter attended with me, her first visit to Flannery's farm. She spent much of her time marveling over the peacocks, especially the "boy bird" with his jewel tone feathers. She sweet-talked her Daddy at the gift shop and went home with a peacock of her own. She charmed the fellow attendees by hamming it up for the camera and lounging on the mats to hear stories from the Thursdalusia participants. We even looked through the books in the the Little Free Library together and selected a title to take home.

I came to know about the Little Free Library (henceforth referred to as "LFL") at Andalusia through my work as an apprentice with the ENGAGE program at Georgia College. My project involved placing a LFL structure at a public place in Milledgeville or Baldwin County. Through my work with ENGAGE, I learned there are already several existing LFL, but many lack charters that would designate them as official. There is also a need to keep the libraries stocked with books and maintained. My proposal aimed to not only place a structure, but to assign local student and campus organizations as sponsors of these structures. Going forward with my project, I plan to create a network and increase communication between the various LFL stakeholders within Milledgeville and Baldwin County so that students can use these existing structures to engage in community-based learning experiences.

Artisan-built, the LFL at the farm resembles the barn found at Andalusia. It is a site to behold, certainly one of the more intricate LFL designs I've found. It was already stocked with an array of literature including two hardback copies of Harry Potter! Part of my Engage project was to find a home for the barn LFL's twin sister. I approached the City of Milledgeville to see about placing the structure at Central City Park and at this writing, we are waiting until the revitalization effort of this park takes place, hopefully in the coming year, before placing the LFL structure.

Once the sun began to set, my husband decided to take our little one home and I saw a rare opportunity to kick back on a "school night" so I helped myself to a second Wise Blood IPA and settled on the bench for some storytelling. I was treated to lovely character sketches by Elizabeth Wylie and inventive fiction from others, as well as serenaded with guitar. I enjoyed conversation with other attendees, many of whom I know from campus and the local farmer's market. The evening sprawled as late summer evenings do, lazy and humid, the gloaming all pink and purple and lovely. And as I drove home, bumping along slowly on the dirt driveway, a family of deer flashed across the road, gliding over the rusty fence and into the wide green field. 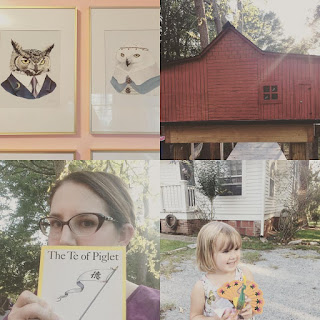 Jamie Addy is an Instruction and Research Librarian at Georgia College's Russell Library.