On Adaptations of Flannery

One of the enduring refrains from the critical apparatus in the modern US is the supposed dearth of original ideas coming from Hollywood. The seemingly endless array of superhero films, remakes, reboots, sequels, and so on is an indicator, some think, of a creative malaise brought on by studio executives’ focus on budgets and profits. This charge, in some sense, is true; of the five highest grossing films of the year thus far, there is one original concept: The Secret Life of Pets, at no. 5. The foregoing is not to say, however, that all sequels and adaptations are lazy or bad. A good sequel or adaptation takes the original material and adds to it in ways that make the new and the old “sing.” The old saw that “the book is always better” usually rings true, but not always; I think immediately of Big Fish and how Tim Burton’s visual style magnifies the strained father/son relationship of Daniel Wallace’s novel.

Flannery fans are fortunate that there’s a healthy supply of worthwhile adaptations of her fiction. Some are somewhat hard to find; I remember a conference here in Milledgeville a few years ago where attendees were fortunate to see “The Comforts of Home,” starring a young Stockard Channing as Sarah Ham. The Georgia College library has a copy of a fairly engaging “Good Country People,” which features a pitch-perfect Manley Pointer explaining his “Chrustian service.” Not all of these rarities are worthwhile, however; O’Connor herself wrote some friends with fairly caustic reviews of a television adaptation of “The Life You Save May Be Your Own” starring Gene Kelly. (In fairness, the rights to that version did procure the Hotpoint refrigerator that sits in the main house’s kitchen to this day.)

Fortunately, other adaptations have found wider audiences. John Huston’s Wise Blood was selected by Criterion for preservation and distribution in 2009, and deservedly so. Huston showcases late 1970s Macon, GA, at its seediest and sweatiest. Indeed, downtown Macon is worth a stop on the way to Andalusia for Flannery fans if nothing else to see what has become of the movie’s landmarks in the interim. Further, my image of Hazel Motes has been compromised by Brad Dourif’s portrayal to such a degree that Dourif is all I can see when I revisit the novel. The Criterion DVD’s special features also introduced audiences to Flannery’s own reading of “A Good Man Is Hard to Find.”

Filmed on location at Andalusia in 1977, the adaptation of “The Displaced Person” very faithfully puts my favorite of Flannery’s stories to film. Perhaps more than any other adaptation, this one brings that story and the farm out of what Flannery calls “the darkness of the familiar.” Glenn Jordan’s direction mirrors our view of the farm, I think; he employs long, sweeping shots of the house and landscape that show off our pond and the rolling pastures. The main house and the Hill House look lived-in, but comfortable. Indeed, every time I go into the Hill House, images of Shirley Stoler and Lane Smith as the Shortleys come to mind. The farm, of course, is a working one: the equipment shed and barns are all lively with day-to-day business, and I cannot help but think of poor Mr. Guizac when I see our tractor parked in the equipment shed.

It’s my hope that more adaptations of O’Connor will come along; she has some relevant things to say about 2016. The travails of Ruby Turpin in “Revelation,” for example, might offer the American public an impetus to reassess its own social ladders and hierarchies, and the Fortunes from “A View of the Woods” are a valuable lesson for those who’d equate economic development with treeless asphalt. Closer to home, new audiences for Flannery would mean a new slate of visitors and friends for Andalusia. As we work to preserve and revitalize the place that inspired her stories. The creative contribution to the memory of O’Connor would be a fitting companion to the physical and fiscal one. 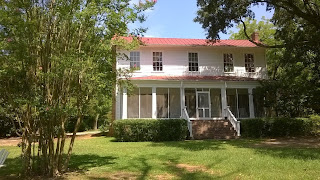 Daniel Wilkinson is a Visitor Services Assistant at Andalusia Farm, an Instructor of English at Georgia College, and an avid reader of Roger Ebert.
Posted by Andalusia, Home of Flannery O'Connor at 9/09/2016 03:00:00 PM