When we first pulled up the dirt road onto Andalusia, it felt familiar. The car bounced on through the winding driveway, passed the caged peacocks, and the worn rocking chairs on the porch. It bounced passed the small pond behind the trees, and all the way up to the empty visitor’s parking lot. We were the first ones to visit that March morning.

We were: my two parents, Debbie and Alejandro, and I, Sarah Lawrence College graduate student, Isabel, studying creative writing. We had been road tripping the past two days from Miami, trying to get back to New Jersey. We had decided when we first planned the trip we would have to stay in Georgia, so why not take a trip to Milledgeville to visit Andalusia? Touring American writers’ homes and graves has slowly turned into a bucket list between me and my father. O’Connor’s home at the top of both our collective lists.

I got out of the car, and walked on up to the back of the house. My parents were already ahead of me, near the front porch. Everything was green and blue. The bright morning light, mixed with the freshness of the earth. The irises were lined up in a row around the foundation of the house. It smelled of early spring. The grass underneath my sandals was wet and squished with each step as I walked up to the front of the house. The small pond was down the hill to my right, and the peacocks in their cages were on the left side of the property. I felt giddy, ready to devour every ounce of knowledge about O’Connor I hadn’t already known.

My fascination with O’Connor started when I was thirteen. I knew I wanted to be a writer, so my dad got me, The Workshop: Seven Decades of the Iowa Writers Workshop. The first story I read in the book was O’Connor’s “The Comforts of Home.” It was breathtaking. I knew, right then, I had to read more. As I continued to read O’Connor throughout high school (both in and out of the classroom), she easily became my favorite writer. From “A Good Man is Hard to Find” to Wise Blood, her writing always captured me on a multitude of levels. The combination of her clear, pungent prose, mixed with wit and harsh criticism of the world she came from, is not only something I admire, but something I strive to create within my own stories. Luckily enough, when I went to William Paterson University for my undergraduate degree, I had the immense privilege of working one-on-one with O’Connor scholar Brad Gooch. His book, Flannery: A Life of Flannery O’Connor, is a book where I have dog-eared almost every other page, and was delighted to find several copies waiting to greet me in the Andalusia gift shop.

Walking through the farm and property of Andalusia felt strange and electric. Passing her bedroom, the old restored kitchen, all the way out to the back— beyond the peacocks and the stables— all of it so green and lush. I was so hellbent on exploring, that it consumed my whole morning. Sometimes I’d walk side by side with my parents and we’d examine the property together, but then I’d get restless and move on ahead of them to another room. We saw it all. I typed on the model of her old typewriter, watched the video about her life in the small art gallery, my mother even bought several iris bulbs from the garden. When I went up to the peacocks and watched the lazy birds lounge on their perches, or walked along the banks of the small pond, I felt closer to her. Like I was allowed a little sliver into her world, what it might have been like when she lived at Andalusia. I remember sitting on a small wooden bench near the pond, my parents climbing up the prairie hill to the front of the house, and feeling the wind rush past my face, the baby hairs on my arms stood up in a sudden chill. My dad called me from the top of the hill, it was time to go.

By early afternoon, we headed out of Andalusia and out into Milledgeville proper to find O’Connor’s grave. I was the first to find it and the last to leave it. I knew I would see it again. We headed back on the highway, up the coast. 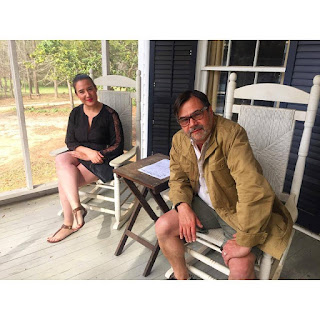 Isabel Anreus is a graduate student in the MFA program at Sarah Lawrence College.
Posted by Andalusia, Home of Flannery O'Connor at 8/19/2016 03:56:00 PM