Flannery and the Family

The longing to discuss what I read and study with loved ones has informed my reading ever since I switched my focus from psychology to literature two decades ago. As a graduate student, I gravitated towards Victorian literature in part because my wife loved and would discuss it with me, and just a few years later added a minor in Irish literature following a pleasant jaunt to Dublin while our first daughter was in the womb. And so it went: we studied Gaelic Irish together when my degree called for a third language, read literary biographies aloud while I studied for my PhD exams, and reread the Brontës side by side while I wrote one of my dissertation chapters.

Since then, our family of four has journeyed together through western narrative, beginning with personal childhood favorites like C. S. Lewis’ The Chronicles of Narnia, moving swiftly through Madeline L’Engle’s Wrinkle of Time series, traipsing through the magical world of Harry Potter, and more recently delving into such popular dystopias as those sketched in The Hunger Games trilogy and Ender’s Game series.

I have been a bit slower to introduce the girls to the types of fiction I regularly teach, wanting their initial experiences of the western canon to be positive. A couple summers ago, when they were 11 and 13, I warily introduced Emma and breathed a sigh of relief when Austen’s humor clicked with them, just as I was delighted a year later to see how much they enjoyed the melodrama and social commentary of Dickens’ Hard Times. Both forays into the nineteenth century generated enough interest each time for one daughter or the other to spend the succeeding year researching and reading the author in question for school. Success!

So you might imagine the anxiety with which I introduced them to O’Connor’s fiction during our family’s pilgrimage to Milledgeville this past June. I had excitedly rediscovered O’Connor after taking a job in California--until then not having read a word since 1994--and for 4-5 years now have been teaching both her short and long fiction in my various disability studies courses, as well as in the Bible as Literature and in Literature and the Arts course I teach annually. My own appreciation of O’Connor grew particularly swiftly this past year; I spent much of my sabbatical reading and writing about O’Connor following fruitful ventures into her letters and manuscripts at Emory U. and George College. She plays a key role in my current book project, and, thankfully, has fully won over the affections of my wife. I did not know, however, how O’Connor’s particular brand of redemptive grotesquery would go over with my teenage girls. Despite their early familiarity with Brothers Grimm stories and recent ventures into violent action movies like Fury Road, I was unsure how they’d react.

Crossing my fingers, and lifted by a prayer or three, I set things in motion a couple days before Milledgeville by reading aloud “A Temple of the Holy Ghost,” starring an unnamed protagonist just slightly younger than my girls. Both O’Connor’s fictional progeny and my own daughters think romance a bit suspicious and sexuality quite icky, share a deep-seated love for the Divine, and are drawn to the mystery of the Eucharist. It seemed a good place to start.

Fortunately, my daughters’ amusement at the young protagonist’s quirkiness--her aspirations to become a hard-to-kill martyr and her arrogant dismissal of older teenagers as “idiots,” among others--did not devolve into condescending critique. They could sympathize enough with the girl’s subject position to laugh without judgment, and were intrigued along with her at the enigma of intersexuality that figures into the story’s recollected carnival scene.

Emboldened, two days later I again pulled out the worn collection of O’Connor’s fiction I purchased in college, and this time chose the more infamous “A Good Man Is Hard to Find.” Our family was, after all, driving from Atlanta to Georgia’s former capitol, allotting just enough time to read the story before pulling into Milledgeville, and there was something particularly poignant about driving out of the same metropolis the doomed family leaves behind in that story, though it took our own car slightly longer than 20 minutes to escape the outskirts of the city . . .

As we drove southeast through a countryside that retains much of the color and texture of the landscape O’Connor knew well in the 1950s, our imaginations proceeded along a parallel path that descended swiftly from the fluffy, comic clouds of family squabbles and poorly behaved children into the horrors of violent loss. The girls were silent as I finished the last few, blood-soaked pages, and then the conversation began, covering the contours of psychosis and self-deception, the sometimes far-from-tender route taken by mercy, and the potentially similar spiritual paths traversed by the Misfit and the old woman he shoots in the chest.

The conversation continued in the hallowed recesses of Andalusia with the help of two kind and knowledgeable docents--escaping into the depths of Wise Blood for a time--and then wound down, appropriately, as key images previously touched only by fancy came into view: a barn, a tractor, a peacock.

And a shared family experience that, unlike the buried recollections of “General” Sash, will be long treasured and only grudgingly forgotten.


Paul Marchbanks is an associate professor of English at Cal Poly in San Luis Obispo, and is currently writing a book on the redemptive ends of much grotesque art. 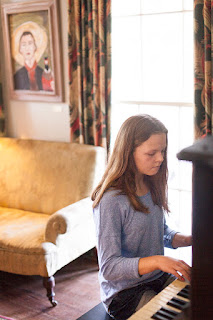