Flannery would have welcomed us, I think, Michael and me, twice making a pilgrimage to the high holy place of Andalusia when a special event allowed us proximity to Milledgeville.  After celebrating Christmas 2014 with family in Atlanta, we detoured to Andalusia while driving home to Florida.  In May of 2016, we were again in Atlanta for the high school graduation of my granddaughter at the Galloway School.  Such an elaborate event you have never witnessed, especially for a Depression child such as myself who attended a yellow brick schoolhouse set back from an athletic field on Atlantic Ave. housing us natives in our journey from first grade to 12th, growing up during WWII in Fernandina, Amelia Island’s fishing village-cum-mill town, where Main St. began at the river and ended at the ocean, where you went home and told Mama if you saw a stranger downtown, and it was entirely apropos that, “If you don’t know what you’re doing, everyone else does.”


So, what drew us to Andalusia? A Florida poet and her professor son, teaching English/Humanities at Embry-Riddle Aeronautical University in Daytona, about whose students he said, “I teach them what they don’t want to know.” Well, if by some abysmal error in academic judgment, the didn’t get Flannery O’Connor, they were not left out of the loop because Flannery has been a figure in Michael’s classes.  Michael is a fan, an ardent fan, and so am I, the reader who marveled at Flannery’s characters, mastery of plot, and dialogue: the amazing doors her imagination led her through.


Our very first visit, it was post-Christmas, it was bitter cold, and Andalusia was respite from the tinsel and tape of the holiday.  It was peaceful and quiet driving from the highway where the white farmhouse rose at the end of a secluded road like something remembered from lost yesteryear, or else, a “Manderlay” of another fiction.  And, speaking of lost, we got Very—as we made our way back to Fernandina on an unfamiliar route we had not traveled before.  But, my son Michael said to me with satisfaction as we left Andalusia, “We did this together!” When I questioned Michael as to why he had wanted to come to Andalusia, he replied, “Be a part of the house and the people who lived there.”  Yes. To absorb its energy, become a more knowledgeable person. Such make up the deep and reverent memories that are the only things we take out with us at final exit.


Returning to Andalusia in May 2016, was homecoming, and when we drove away this time, we did not get lost.  There was a leisurely drive on the lovely Georgia backroads.  Parking our car at the back yard of the house, there was a low wooden performance space that had been set up for special events, and under shade trees lawn chairs were placed in a wide circle for the comfort and welcome of visitors. Come sit a spell, I heard in my head like the Southerner I am, and so we stayed a spell enjoying the intimacy and privacy of the setting.


Next stop by unspoken consent was the screened-in pen that housed the peafowl, one female, and a male of the exotic plumage. Michael, camera in hand, focused in on His Majesty, the male.  Some minutes passed while the two birds slowly paraded before us as if accustomed to celebrity, then, several minutes more and the male fanned out in all his glory and stood (so it seemed) striking a pose in front of us.  Michael said, “Flannery had said, ‘Do not try to make it happen.’” But, it happened! I told Michael, “I think he likes you.”


After negotiating the front steps leading up to the porch and into the foyer of the house, we stopped at the front desk to make some purchases.  A fine edition of Flannery’s collected stories, some buttons imprinted with Flannery’s highly recognizable face for Michael to wear on his t-shirt, for me to wear at my table at the next Amelia Island Book Festival; and especially for me, handmade by a local artist, a double strand of carnelian’s mysterious and magical stones no doubt prized by queens and priestesses.  One of the ways we touch back to history, not to mention the primary reason we were there.


History is heavily embedded within Andalusia’s walls.  We passed through room to carefully preserved room, and in the silence there is a palatable O’Connor presence that asks for reverence like a church or cathedral.  In the house kitchen with its appliances the like of which we shall not see again, it brought up an image of my stepmother feeding wet garments through the wringer of that same kind of antique laundry machine kept in the garage of the beach house I grew up in. From the kitchen, there is a small windowed porch in which the only furnishings consist of a couch placed against the windows, and a desk on which sits an antediluvian typewriter.  Michael set in solitude for a long time on the couch in that room in communion with the remaindered spirit he must have felt there. I don’t think it accidental that Flannery was born on March 25th, and Michael was born March 24th.  Separate years, but surely kindred spirits of the Ram. As the uninvited fellow who impulsively sat down to share my blanket at a concert in Atlanta’s Piedmont Park said to me, “The beautiful people find each other.”


Knowing that Flannery was as fascinated as this writer with all types of birds had a strong resonance for me. I sat down at the desk, punching the keys energetically just as in Miss Ross’s typing class at Fernandina High School so many years ago. I wrote several paragraphs to leave behind me about my favorite bird, the breathtakingly beautiful male cardinal who for me is an omen of imminent good fortune—often the case when the cardinal and poet cross karmic paths.


So, thank you, Andalusia, for the floodgate of memories you have unlocked.  Thank you for your tangible past that interprets the present and leads us into the future, enriched. We shall come again for this.  And again, and again. 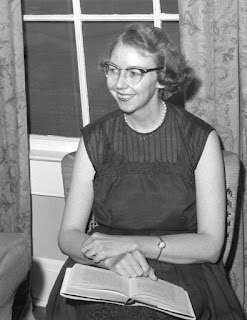 Nola Perez is a poet and memoirist from Fernandina Beach, FL.  She is the author of In the Season of Tropical Depression, The Movement of Bones, and other works.
Posted by Andalusia, Home of Flannery O'Connor at 8/05/2016 03:00:00 PM