There And Back Again: An Author's Itinerary

There were few things that the young Flannery O’Connor feared more in this life than living in Georgia for the rest of her days. She elaborated on these fears in a biographical sketch she wrote as a master’s student at the University of Iowa. Her education in Milledgeville, she feared, had prepared her for one thing only: to teach English to ninth-graders in Podunk, Georgia, for $87.50 a month. Her words, not mine.

But of course Flannery O’Connor did come home to Georgia for the rest of her life, and the story of her homecoming is one of the most significant homecoming stories in the history of American literature. As a child and student, O’Connor moved from Savanna to Atlanta and then to Milledgeville. As an aspiring writer, she moved first to Iowa City for the university’s writers workshop; then to the Yaddo artist colony in Saratoga Springs; from there to a walk-up apartment in Manhattan; and from there to a room above a garage in Redding, Connecticut; and then, finally, back to Milledgeville, to the farm that would inspire much of her life’s work: Andalusia.

Each of her life’s stops added a new aspect to her art: the grotesque, the satirical, the tragic, and the graceful. These aspects would ultimately converge at Andalusia, from whose porch and fields O’Connor witnessed the whole world.

O’Connor developed her interest in the humorous, bizarre, and grotesque as a child in Savannah, where she grew up enjoying gruesome stories from Poe’s Humerous Tales and telling her own tales to friends whilst seated, surrounded by sprinkled flowers, upon the toilet in the family bathroom on the third floor of her house on Lafayette Square (she required that her audience sit attentively in the tub).

O’Connor honed her skills as a satirist and regionalist after moving to the Cline family home on Greene Street in Milledgeville to attend high school and college. At the experimental Peabody High School, O’Connor’s individualism was nourished and she was encouraged to do such things as sew clothes for her pet birds for class exercises. O’Connor, not surprisingly, writes that she hated the school and wished the place had forced her to learn the classics. In her many publications at the Georgia State College for Women, O’Connor developed her skills of regional observation and satire in cartoons, poems, essays, and stories that lampooned her fellow students, Milledgeville’s gentility, and, especially, the U.S Navy WAVES who had invaded the wartime campus.

O’Connor brought these formidable skills with her to the Iowa Writer’s Workshop. Her fellow students—mostly men and veterans—were in awe of the quiet little southern lady in the Georgia Bulldogs sweatshirt who sat against the wall. O’Connor by then was already a published author, and while at Iowa she sold two more stories and won the workshop’s Rinehart-Iowa prize for the first four chapters of Wise Blood.

This early work, though, is not the complete O’Connor package. A story such as “The Crop,” for instance, possesses all of O’Connor’s satirical, regionalist style but little else. In this story Miss Willerton sets out to write a “social problem” novel focusing on the wretchedness of the rural poor. She writes only three sentences before she stops writing and gets lost in a daydream about her sharing a torrid life with her abusive protagonist, Lot Motum. When she returns to those three sentences, the problems of the rural poor no longer interest her. So she decides to write a story about the problems of the Irish instead. Ba dum.

“The Crop” is funny, but it lacks two essential components of a true O’Connor tale: a classical, often tragic structure, which O’Connor learned while living with the Fitzgeralds in Connecticut; and a religious sensibility, which O’Connor would fully explore after her return to Andalusia.

While working on Wise Blood in the attic at the Fitzgerald’s house, O’Connor for the first time in her life felt secure enough to express her religious views in her fiction. However, like a medieval scholar, she needed the Greeks to help her communicate those views. O’Connor figured out how to write the ending of Wise Blood—a novel she had started a half-decade earlier and was struggling to finish—from her host Robert Fitzgerald, a Harvard professor who was translating Sophocles. O’Connor read Sophocles for the first time in Connecticut, and when she read Oedipus she knew that Hazel Motes, too, must blind himself. O’Connor uses the imagery of Greek mythology in several of her stories, and she follows the arc of Greek tragedy, of proud people brought low, in many of her plots.

With the tragic gravity of the classics finally acquired, O’Connor returned home for Christmas in 1950. Her lupus erupted during the train ride, requiring emergency surgery. She would never leave home for an extended period again.

It was at home at Andalusia that O’Connor ultimately found the subjects for much of her mature fiction, in the life of the family farm, her mother Regina, the local newspaper, even the phone book. The Misfit is based on a real bank robber; General Sash and his granddaughter are based on real people whom O’Connor thought were ridiculous; the Displaced Person is based on a Polish refugee family Regina invited to Andalusia; the bull in “Greenleaf” is based on the neighbor’s bull; the boys in “A Circle in the Fire” are based on runaways from the local juvenile boot camp; and so on….

O’Connor eventually recognized that her return to Andalusia was the completion of her journey as an artist. She explains her sentiments in a letter to her friend Maryat Lee: “This is a return I have faced and when I faced it I was roped and tied and resigned the way it is necessary to be resigned to death, and largely because I thought it would be the end of any creation, any writing, any WORK from me. And as I told you by the fence, it was only the beginning.”

When you visit Andalusia, go to that fence (any will do) and follow its rails to a point on the horizon. There you will discover where the routes of O’Connor’s life’s journey converged, the many aspects of her artistry became one, and her true work began. 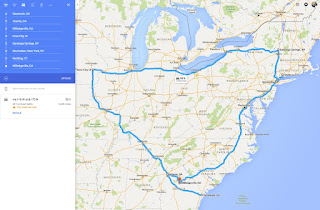 Doug Davis is professor English at Gordon State College in Barnesville, Georgia, a short drive west from Andalusia. He is currently editing a special issue of The Flannery O’Connor Review on the topic of science and technology in O’Connor, which will be the subject of his next Andalusia blog post.
Posted by Andalusia, Home of Flannery O'Connor at 6/17/2016 03:00:00 PM