The Mentor in Milledgeville: Caroline Gordon at Andalusia


“Whenever I finish a story I send it to Caroline before I consider myself really through with it,” O’Connor once wrote. “She’s taught me more than anybody.”1

My current research project is an attempt to reassemble the unpublished correspondence between Flannery O’Connor and Caroline Gordon, one of O’Connor’s most influential artistic mentors.

In unpublished letters, Gordon writes that she feels foolish—even presumptuous—critiquing O’Connor’s stories. Yet the letters she writes are expansive, illuminating letters.

O’Connor wrote to Gordon from Andalusia.

Gordon’s first letter to O’Connor was written in 1951; Gordon didn’t visit O’Connor at Andalusia for eight more years. By then, they had exchanged over 48,000 words of correspondence.

In October, 1959, Gordon arrived in Milledgeville with Ashley Brown.

Flannery O’Connor’s mother, Regina, clashed with Caroline Gordon. While out on a drive with Regina at the wheel, Gordon saw a dog that (she believed) needed rescue. Gordon wanted to bring the creature safely to Andalusia. Regina refused to stop. Later, Gordon convinced Ashley Brown to go back out and search for the dog. The dog, Gordon said, could remain in Brown’s car overnight if Regina didn’t want the dog at Andalusia. (Regina didn’t!) Brown humored Gordon. They searched. But he was relieved when they could not find the dog, and he told Regina he would not have allowed the dog to stay in his car. Later, in a conversation about farm business, Gordon and Regina disagreed about artificial insemination. Gordon, the Catholic convert, opposed it as unnatural; Regina, quite pragmatically, felt otherwise.2

On Sunday, Gordon gave Flannery O’Connor feedback on her final draft of The Violent Bear it Away— “several hours lecture on my prose,” said O’Connor. “I have just corrected the page proofs and I spent a lot of time getting seems and as-if constructions out of it. It was like getting ticks off a dog. I was blissfully unaware of all this while I was writing it.”3

Gordon and Brown departed. Regina told Flannery that she understood why that man (Allen Tate, Gordon’s husband) would want to divorce Gordon.

Despite Gordon’s strong personality, Flannery fully grasped the value of these critiques. To a friend, O’Connor said of Gordon’s comments: “It would have done your heart good to see all the marks on the copy, everything commented upon, doodles, exclamation points, cheers, growls. You can know that she enjoys reading it and reads every word.”

Gordon next descended on Andalusia in September, 1960.

Writing to Lon and Fanny Cheney, O’Connor said, “I had a call from Mrs. Gordon Tate Herself from Princeton saying her aunt in Chattanooga had summoned her and she would like to come see us on her way back. She said she would come on the following Tuesday but arrived instead on Monday. She stayed until Wednesday and we haven’t heard from her since she left. However, the people over at Wesleyan are having one of those Arts Festivals that no college can now do without and have invited her to be on the panel (me too) and she wrote the man she would come down as she would be glad to continue her visit with us. So it appears we are to be honored again.”5

After the conference, Gordon and Porter planned to visit Andalusia. O’Connor predicted (with her usual dry humor) that the occasion would be something to see: “According to Ashley [Brown], these two have not confronted each other for fifteen years.”7

The highlight of the weekend, however, was when “Katherine Anne remembered to inquire about a chicken of mine that she had met here two years before,” said O’Connor. “I call that really having a talent for winning friends and influencing people.”8

Meanwhile, Caroline Gordon read a draft of A Memoir of Mary Anne and, after admiring it, urged O’Connor to find a secular publisher.9

Gordon’s next Andalusia visit was the following year in July, 1961.

O’Connor was working on “The Lame Shall Enter First.” Gordon’s feedback was characteristically blunt. The story wasn’t dramatic enough, Gordon said. O’Connor was writing too many essays and it was affecting her style.

O’Connor acknowledged that Gordon was correct in her analysis. And there were “a million other things that I could have seen myself if I had had the energy,” O’Connor said. “So much of my trouble is laziness, not physical laziness so much as mental, not taking the trouble to think how a thing ought to be dramatized.”10

After the visit, O’Connor said, “Ashley and Caroline were strenuous, as usual.”1

For many writers, extended isolation (such as O’Connor’s at Andalusia) fuels uncertainty and darkens the maze of revision. Detailed, thoughtful critique from a trusted reader—however humbling—offers explicit relief. Despite O’Connor’s occasional wicked and unsparing characterizations of Gordon, O’Connor clearly found Gordon’s comments illuminating, generous, and life-affirming.

Among Gordon’s circle of friends, O’Connor was one who knew of Gordon’s painful personal struggles. When one person harshly criticized Gordon, O’Connor outlined the details of Gordon’s struggles and insisted: Pray for her.12

During the July, 1961 visit, O’Connor noted that Gordon had stopped drinking—not even a glass of sherry. O’Connor thought that Gordon (divorced now) seemed much improved.13

That would be Gordon’s last visit to Andalusia.

It remains noteworthy that Gordon’s earliest critiques of O’Connor’s work (in 1951-52) coincided with O’Connor’s move to a new home, Andalusia. A landscape of sprawling pastures circled by jagged pines. From her first letter to her last, Gordon told the young writer to expand her use of landscape and nature, to enlarge her fictional settings and reflect O’Connor’s Christian vision of an eternal God.

Year after year at Andalusia, Flannery O’Connor would place Caroline Gordon’s letters to the side—then get back to work. 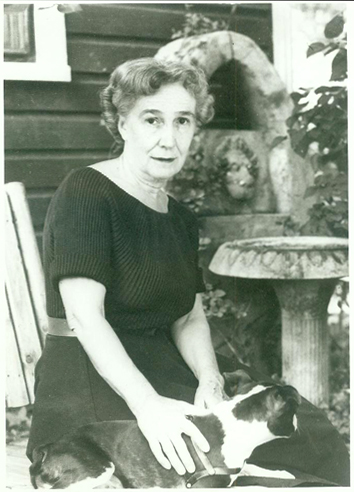 Christine Flanagan, MFA, is an Associate Professor of English at University of the Sciences in Philadelphia.