The Magical and Mysterious Milledgeville


What an honor – I walk the same streets as she did, study at the same college as she studied, and subtly stare at the same types of people she stared at not too long ago. This feeling is magical, though Flannery O’Connor might have made fun of me for saying that. Living in Milledgeville, where O’Connor spent some of her most productive days, is an adventure in itself. But studying O’Connor at her alma mater, frequenting Andalusia, her beautiful and quaint family farm, and working closely with her manuscripts is all part of a real adventure.

When I was first required to read Wise Blood in my senior year of high school, I hated it. I had trouble understanding how the parts of the novel fit together. I loved the language, specifically the Southern colloquialisms, but I wanted clear answers after reading. I wanted to understand why O’Connor wrote in detail about a mummy and a gorilla suit, and why there wasn’t much actual blood. I loved the grotesque elements in the novel but I still wanted concrete answers.

When I re-read Wise Blood in the sophomore year of my undergraduate program, everything had changed. Slowly but surely, the symbols became more apparent and the words on the page started dancing like some of my favorite poetry. I looked around the streets in downtown Milledgeville and suddenly saw O’Connor’s characters: a ragged-looking lonely young man simply trying to survive without his mother, a well-dressed older man preaching his beliefs to those who didn’t care to listen, a scantily-clad woman, leaving passersby with questions as to her occupation. I was here. I was in Taulkinham, Tennessee.

I was also here looking at a barn in which a Bible salesman stole the prosthetic leg from an intellectual woman after seducing her. I was driving down the dirt roads which would lead me to a murderer I’d heard about in the news. I was in the woods watching a wild turkey, I was visiting Atlanta for the first time with my grandfather, I was working as a farmhand, I was attending the Partridge Festival, I was drowning in the river. And I was doing all of these things here, in Milledgeville, Georgia.

There is a lot to be said about Flannery O’Connor and her works, career, family, beliefs, disease, and her heart. It’s a lot easier to say those things when you’re in it – when you’re surrounded by some of the same images she was once influenced by. I know this feeling is not unique to only me – many people have felt it before me and I pray to Flannery’s God that I will not be the last to feel it. 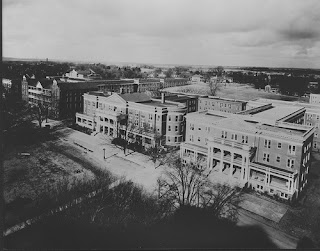 Catherine Bowlin is a graduate student at Georgia College & State University and writing her Master's Thesis on O'Connor.