This past week has been an adventurous one, to say the least. Two days’ worth of tornadic weather joined the disastrous fire on that Atlanta interstate, and we topped it all off with an earthquake under Lake Sinclair that measured a 2.5 on the Richter Scale. If there ever was a weekend that called for watching a golf tournament and early-season baseball, this one surely qualifies. “Therapy sports,” one might call them.

However, with severe weather comes some additional responsibilities for us at the farm. One of the trees in the front yard lost a significant section of its main trunk in this week’s high winds, which have continued over the course of this week. Further, the needs of the horse barn stand in ever sharper relief as sections of the tin roof report in the stiff breeze. Even the peacocks take precautions: their heat lamp is still humming along in these cooler evenings, despite the calendar’s insistence that Spring has arrived.

Storms can even get the law involved out here, oddly enough. Thunder “right on top of the house” as my grandmother would put it has in the past set off the security system in the main house, and yours truly was almost to row up to the house in a driving summer storm a year ago with a member of Milledgeville’s finest. That officer had never been here as a tourist; while the rain died down, I gave him the condensed version of the house tour.

I won’t mind a little cooperation from Mother Nature this weekend, and I’m sure that mass of visitors in Augusta would prefer to be dry. If the weather holds this weekend, we will locate some volunteers and a chainsaw or two, and the front yard will appear roughly normal in short order. Then, maybe, I can see how the pros deal with it all over in Augusta. 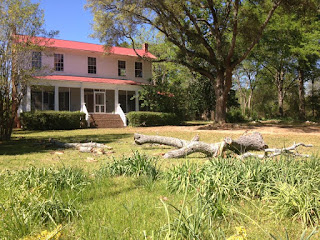 Daniel Wilkinson is Andalusia's Bon Vivant and has been known to make very large divots on local golf courses.
Posted by Andalusia, Home of Flannery O'Connor at 4/07/2017 04:00:00 PM