A tour this morning at Andalusia was greeted not just by yours truly, but by the peafowl, as well: their enthusiastic voices rang out around the farm for most of the morning. Springtime is an active season for Manley II and Joy/Hulga, of course, between his attempts to get her attention with a dancing spread of the tailfeathers and her steadfast refusal to pay him much mind. Their seeming disagreements during the dances notwithstanding, there are some rare moments of seeming agreement between the two of them: choral singing. I speak, of course, of the distinctive peafowl call. It’s somewhere between anguish and exuberance, and I really can’t tell which unless I see a hawk overhead. Manley II, younger, has a sort of bluegrassy tenor voice, Joy a deeper alto. In good times, it’s a pleasant shout; in bad, a full-throated honk that would make a whole flock of geese take notice. Flannery said in one of the letters that she stopped counting at 50 peafowl. I can only imagine the hue and cry if they all starting going at once.

Flannery’s birds had some practical uses, as well, though I wonder if they were outweighed by the birds’ tendencies toward volume and flower bed ruination. (I think chiefly of that wonderful anecdote from Alice Walker’s mother, who, during a visit to the farm years ago with her daughter, was unimpressed by a spreading of tailfeathers and instead told Alice that those things would “eat up every bloom you’ve got if you’re not careful.”) Appetites for destruction aside, between her peafowl, geese, ducks, guineas, chickens, and heaven only knows what else, I am sure the insect situation at Andalusia was firmly in hand. I would think that there’d be hardly any of our now ubiquitous mosquitos and such with all that avian activity. Furthermore, some of those chickens likely became, for lack of a better term, 8-piece buckets on special occasions.

The foregoing, of course, are just the domesticated birds of Andalusia. There’s still a contingent of wild turkeys in the vicinity that sometimes find themselves by the horse barn or on the hiking trail, and the ever-present crows and aforementioned hawks will periodically battle over prime perching space within earshot.

We are, in short, a bird sanctuary within a bird sanctuary. Those honks and screeches of the peacocks are but slightly discordant notes over the course of our days, but they’re charming and endearing. We, of course, welcome you to come sing along with them—Manley’s got to dance for someone, after all. 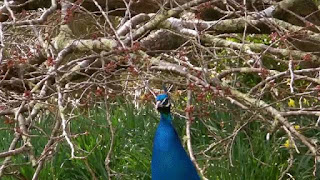