On First Looking Into Flannery's Homeland

The first time I visited Andalusia, I was a high school student from an adjacent county; the trip was organized, and likely funded, by my free-spirited, flower child GT teacher, and while I am sure we were assigned at least one Flannery O’Connor story, I don’t think I understood a single thing about her work. It was probably “A Good Man Is Hard to Find,” and since I knew where Toomsboro was—my father took us through there countless times when tracking down a genealogical lead or a good fishing spot—I probably responded with a “Cool” and thought very little about the brilliant and formidable writer from the next county over. In the late seventies, her name was floated around our rural community, but few of us were aspiring literary researchers, and even fewer of us thought writing a viable career path.

We were practical, the progeny of agrarians, or career military men, our mothers were at home cooking cornbread, and even those of us who wanted to read and write “literature,” stored those ideas for some future in which aliens from another solar system cured cancer with light sabers. The name Flannery O’Connor echoed quietly, like Culver Kidd, or Aaron Burr, who purportedly spent the night in the Warthen jail. It was not as common as “Silk Stocking Street,” or the official “Georgia Plate” designs--our own county’s claims to fame. O’Connor made a little rumble, but even in Milledgeville five to ten years later, O’Connor’s work and reputation seemed something stored in small pillbox, silver and velvet lined and valued, but also hidden away with the good silver and protected by those with the access key.

This woman whose writing I came to know, was still on the other side of the river. And on that day, my first time to visit Andalusia, I had to cross that river, the Oconee, and a greater, more treacherous river, the one running so swiftly, so filled with eddies and currents that it might pull me under--that river which stood between the real world and the writer. So: there the river—and me in my little high school row boat.

Across the river were the lucky few, the writers, and they weren’t real, not real like those of us who rode a schoolbus, and went fishing with our grandparents and came home covered in redbug bites. Not real like the hopeful older brothers who thought the kaolin mining industry was the new salvation.

But there I was, and there she had been—from my father’s generation, and she saw the same “Jesus Saves” signs and we both had driven through “Goat Town” and had watched the hydro-electric dam being built. The same flood of technology swept our lives, shifted our stable one-income homes, pulled our mothers into the workforce and independence.

We watched the same suffering of poverty and racial inequality rip our cultural fabric, and we watched with bulging eyes and gasping breaths as our grocery stores and our schools became barricaded, our many divided institutions rumble toward a solid and integrated system, like an earthquake reversing itself.

What do I remember of my visit to Andalusia that day? Only a few peacocks, people still farming, I think. I remember a tractor running, but maybe it’s only in my imagination, whetted by my much later reading of “The Displaced Person.” Time—even now—seems convoluted; how could I have gone there, and not seen some likely spot for Mr. Guizac’s end, or the very cow from which Asbury’s undulant fever ensued? Historically, I wasn’t so far from the years O’Connor conceived and wrote those narratives. But that first day, I knew nothing, really, of O’Connor’s characters or fictive world. And yet---

I remember rust on some of the screens, a wooden table with a cloth that partially covered it. I remember being introduced to Mrs. O’Connor, her offering us lemonade from the table in the yard. I remember her demeanor, one of kindness and suffering, of a kind of earned pride. We did not go inside. I remember a breeze , gauzy, cotton curtains flowing into the dark and hidden rooms.

I remember the sensation of being somewhere important, somewhere that was changing me, almost like a birth. I felt the way I have felt many, many times since--when reading her stories and novels and letters.

I have visited many other times, often alone, but at times with friends or family members whom I forced on pilgrimages, willing them to feel the sacred in every board or feather or pinecone (which I just now remembered calling “pinecombs” as a child). Several times, when the farm was closed to the public, I drove out highway 441, and parked somewhere close, walked back down to the entrance and touched the chain that held the sign reading “Private Property.” Once, I climbed under the chain and negotiated the dirt drive, weaving in and out of the trees to conceal myself, just to get close enough to see the house. (Gosh, I hope the statute of limitations has run out on being prosecuted for this crime--involuntary as a sneeze as it was.)

Something of Flannery still moves here. I can see it when I follow the tours, the most recent of which was with the National Endowment for the Humanities scholars this past July. The first time I touched that soil, something grew in me. Something still grows in me, a hunger for more than just her words. Her vision, I think.

Next time I visit, I plan to take off my shoes, grind the dirt between my toes, and find, once more, some molecule of the world that Flannery O’Connor wove into being. I urge anyone reading to visit. But be careful. You won’t be able to go just once. Even if a chain and sign do go up again. 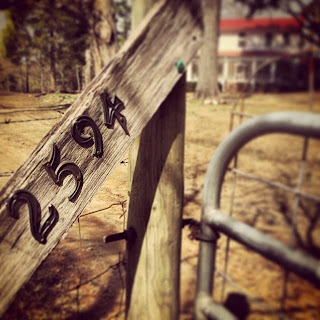 Sue Whatley is a native of Georgia, transplanted to East Texas, who consoles herself on the inferior Texas versions of her beloved Georgia pine trees and red clay. She teaches at Stephen F. Austin State University in Nacogdoches, Texas, and coordinates the Christian Writers Fellowship, a long-time writer’s support group there. Her BA from Georgia College, her MA from Northeast Louisiana University, and her PhD from Texas A&M, Dr. Whatley has proudly engaged Flannery O’Connor’s work with every step of her travels. When she retires, she intends to follow Flannery’s pursuits—writing and working with other writers, making people laugh, and raising peafowl, though she has no plans for teaching any of them to walk backwards.
Posted by Andalusia, Home of Flannery O'Connor at 2/19/2017 12:31:00 PM