And the Award Goes To:

I must confess: I’ve never been an avid Oscars watcher. Likely stemming from a tendency to stay away from movie theaters, the awards have always been more of a news item to read during the following Monday morning than appointment viewing. I’ve always been one to wait a while and watch a movie from the comfort of my own couch than to head off to the cineplex, save for a now yearly convoy of several friends to the latest Star Wars release.

One might think that teaching would put me in a theater seat more often in order to stay apprised of new developments on the adaptations front, but literary adaptations have not done well for themselves in recent years, especially adaptations of Southern literature. I think immediately of James Franco’s attempts at As I Lay Dying and The Sound and the Fury; Faulkner is hard to even read, much less to put on camera. I have to go back to No Country for Old Men for the last time a Southern work made award-season hay, and even then I have to stretch a good bit to put Cormac McCarthy into the Southern canon.

I am cautiously optimistic about the forthcoming version of “A Good Man Is Hard to Find” being written by Benedict Fitzgerald, the son of Sally and Robert Fitzgerald. As far as literary adaptations go, Fitzgerald has a writing credit for John Huston’s Wise Blood and a wonderful TV miniseries version of Moby Dick with Patrick Stewart and Gregory Peck, so I’m hopeful for this film. However, the most engaging moments in “A Good Man” take place on a back road and in dialogue between only two characters, and all the while some starkly violent things are happening off in the woods, largely out of our view. It will require some, shall we say, interesting directorial work to film a story about a whole family’s getting murdered while dealing with some rather deep theology at the same time.

Adaptations of Flannery’s fiction have been hit-and-miss over the years. As much as Brad Dourif has spoiled me with his Hazel Motes from Huston’s Wise Blood, the rest of the movie doesn’t quite “sing” like the novel, but I suspect I am biased in favor of prose. My favorite remains The Displaced Person filmed at Andalusia, and not merely because the farm is featured in it. Glenn Jordan’s direction mirrors our view of the farm, I think; he employs long, sweeping shots of the house and landscape that show off our pond and the rolling pastures. Indeed, the production crew even refilled the pond for us at the bottom of the hill for a wonderful shot of the house. The main house and the Hill House look lived-in, but comfortable. The plot itself is quite faithful to the story, down to Mrs. McIntyre’s self-assurance and Mrs. Shortley’s fatal indignity.

Flannery’s stories, I suspect, may be rather difficult to film. That narrator of hers, at times caustic but always honest with us, is hard to replace with a camera. Actors, too, will have a tough time beating out the ones she’s put in my head. I’ll prefer, at least for the time being, to head out to the farm and have the “play” of the story set before me in the landscape. 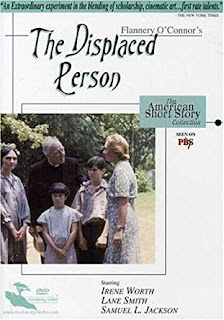 Daniel Wilkinson is an Instructor of English at Georgia College, Bon Vivant at Andalusia, and a huge fan of Roger Ebert.