Milledgeville—and indeed very nearly all of Georgia and I hope the South at large—awaits the arrival of the evening of February 5th. Right after the February Four presentation on O’Connor’s new book covers by artists June Glasson and Charlotte Strick, our Atlanta Falcons, will take the field at the Super Bowl. The franchise’s history is something out of a Flannery story, really; times of competent play and frequent victories give way invariably to ignominious defeats aplenty with little warning. With little exception, the Falcons have, in short, had Human Development hit them right between the eyes fairly consistently for fifty-one seasons, far more often than Ruby Turpin in “Revelation.” Nevertheless, a Turpin-like grieving over the Falcons’ fate remains for the fans.

All this losing over the years has contributed to no small amount of apprehension among us Atlanta faithful. We might be celebratory this week (hence the inspiration for this post), but it will yield next week to something more somber and darkly anticipatory. The Raybers of the sports world will attempt with their statistical studies and prognostications to dissuade the longtime fan of his misgivings, but the prophecies-come-true of the past fifty years are hard to ignore. Sunday afternoons on Bon Vivant duty at the farm have often been a welcome change in the Fall and Winter months, as the guests free me from the obligation of checking the score.

Flannery herself didn’t have to worry about Atlanta-area sports during her lifetime, of course, though the Georgia Bulldogs not far away in Athens likely occupied a significant enough share of the news. In the fiction, sports are largely a distraction; I think immediately of a newspaper sports section that occupies Bailey’s mind at the beginning of “A Good Man Is Hard to Find.” I hope Flannery would be a little heartened by Atlanta’s uniting in support of the Falcons during a, shall we say, contentious moment in our country.

Our modern Andalusia has turned toward the sporting world to good effect, however. Our warm January has brought the outdoorsy folks an early taste of Spring, and they’ve taken advantage of what the farm offers. Our hiking trail and open spaces bring a fairly consistent number of local, repeat visitors inside our gates, and we’re happy to have them and their frisbees and footballs as often as they’ll join us. It’s my hope we’ll have the full range of guests on a warm February Sunday forthcoming: the lecture audience, the faraway travelers on a literary pilgrimage, and the picnicking hikers. Cheers! 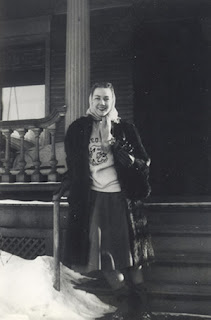 In Iowa, Flannery takes to UGA apparel amid the snow and cold. Notwithstanding her time in Connecticut, I feel she would take the Falcons over New England next week, if for no other reason that their mascot is a bird.

Daniel Wilkinson, a Visitor Services Assistant and Bon Vivant at Andalusia, is a poor football prognosticator but tries his best.
Posted by Andalusia, Home of Flannery O'Connor at 1/27/2017 05:15:00 PM