With our elementary and secondary teacher friends reopening their classrooms after the break and Milledgeville's collegians drifting back into town (and likely bringing some wintry weather with them, too), we are pleased to revisit this essay from 2014 from Rhonda Armstrong. Cheers!
--Daniel Wilkinson, Blog Editor & Bon Vivant

“First-grade schoolchildren, who learn by living”[1]

My two daughters, ages three and seven, refer to Andalusia simply as “the farm.” They visited for the first time this summer, while I was staying in Milledgeville, and the peacocks were, of course, the big draw. They filled multiple pages of the then-new easel with their drawings, enjoyed a picnic under the trees, and braved the dark to venture into the barn. They entered the house under duress, to visit the restroom, although they were suitably intrigued by the art in the back room and the magnets in the gift shop.
Flannery O’Connor’s writing desk, with her crutches propped alongside? The seven-year-old gave it a cursory glance before wandering out to the porch in the middle of my informative speech. She doesn’t know anything about Flannery O’Connor, and how would she, really? During those occasions when she has peeked over my shoulder while I’m reading O’Connor, I have quietly closed the book before she can read someone being shot, or choked, or shoved through a  banister, or abandoned in a café. So out to the pleasant porch she goes.
In a 1963 letter to Janet McKane, the New York grade school teacher with whom she corresponded, O’Connor described the local schoolchildren’s visits to Andalusia: “The children go all over the yard and see the ponies and the peacocks and the swan and the geese and the ducks and then they come by my window and I stick my head out and the teacher says, ‘And this is Miss Flannery. Miss Flannery is an author.’ So they go home having seen a peacock and donkey and a duck and a goose and an author….” (HB 545).
I always had the impression that O’Connor disliked children, so much so that she wouldn’t hang around with them even when she was one. The stories of her childhood are often funny: how she ordered her playmates into the bathtub of the Savannah house, where she forced them to listen to her read aloud, thereby ensuring they would never return for a second visit. That image of a tiny O’Connor presiding over a bathroom lecture fits, I think, with our image of her as an adult: well documented sense of humor, but no apparent patience with silliness, and no willingness to waste time with company that couldn’t hold their own in an intelligent conversation.
When I teach O’Connor’s short stories, my students often latch on to the portrayals of Wesley and June Starr in “A Good Man is Hard to Find,” and they comment on how awful those children are. But in contrast to June Starr, who is sassy and obnoxious even as she is led off into the woods to be shot, O’Connor writes a character like Mary Fortune in “A View of the Woods.” Mary Fortune’s world looks an awful lot like Andalusia, and although she is her grandfather’s one favored heir, she rejects his love when he sells off a parcel of land, obliterating her view of the woods across the front lawn from the house. She proves to be irritating and sullen in her grandfather’s presence, but as a reader, I am with her all the way.
It is characters like Mary Fortune who make me believe that O’Connor had some respect for those “exceptional” (and O’Connor informs McKane that “around here [exceptional] means the defective ones”) first graders bumbling about on a farm ogling peacocks, ponies, and writers alike. Maybe she appreciated their refusal—or unwillingness—to have more awe for the author than they have for the goose.
I’m tickled to see that Andalusia’s wish list includes a donkey and a goat, and that Dr. Bruce Gentry is reporting on middle school students visiting the farm. They might not (yet) understand the importance of that front bedroom, but the lilies and the barn have quite a bit to offer, too. 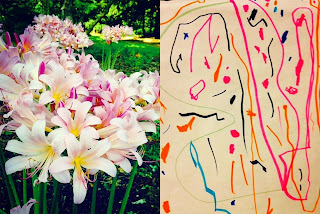 [1] From O’Connor’s essay “The Kind of the Birds,” reprinted in Mystery and Manners, 9.


Rhonda Armstrong is an Associate Professor of English at Georgia Regents University in Augusta.
Posted by Andalusia, Home of Flannery O'Connor at 1/06/2017 03:30:00 PM