Before all the festivities of next weekend, there’s gratitude to offer that’s both pre-emptive and overdue. The Bluegrass Festival, and indeed many of our programs at the farm, would hardly be anything at all without the efforts of our volunteers. Their efforts are frequently unglamorous and require a little dirt under the fingernails but are integral to our work in restoring and perpetuating Andalusia. Just this past weekend, a troupe of volunteers readied some of our out-buildings for the impending visitors. From those who will direct the traffic into the farm to those who will be selling CDs and t-shirts, we could accommodate only a fraction of the Festival’s attendees without those who give their time so freely.

I started my time at Andalusia with volunteering at the Bluegrass Festival, actually. 2014’s concert was in need of a host, and our Director, Elizabeth Wylie, was given my name by a mutual friend of ours. To be honest, at the time I didn’t know I could speak off the cuff to a group larger than the average English class, much less a backyard of 500+.  That first hour was a nervy one.  For the record, the nerves left once I told a couple of bad jokes and the stage lights made the crowd disappear. My experience two years ago gets at the benefits of volunteering: we can grow by stepping out of our comfort zones and letting ourselves serve others.

Our volunteers don’t stop with putting on the big events, either; their dedication is such that they seek out ways to serve. This space is chock full of guest bloggers who offer up their reflections on Flannery and Andalusia only for the joy of doing so. The Main House is welcoming and bright on a weekly basis thanks to volunteer efforts that bring in flowers and keep them watered. Thursdalusia’s beverages are iced and the February Four’s snacks are plated by people who attend those events wishing to both learn and serve. May we all go through our lives with such a purpose.

I always say I get the fun jobs on the farm, and the volunteers’ efforts make the fun jobs just that (and not a job at all, really). I envy their generous spirits and am humbled that they give their time so freely to let me “Bon Vivant” out on the farm. Thus, to all the volunteers, I, along with the rest of the staff at Andalusia, offer a hearty thanks. 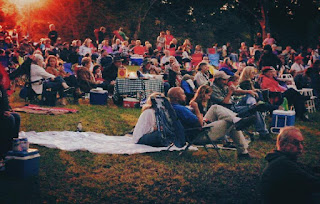 Daniel Wilkinson volunteers himself at the Old Capital Museum and the Brown-Stetson-Sanford House along with a large cadre of dedicated folks when not attending to duties as Andalusia's Bon Vivant.
To volunteer at Andalusia, give us a call at 478-454-4029.
Posted by Andalusia, Home of Flannery O'Connor at 10/28/2016 03:00:00 PM