The Comforts of Home, 900 Miles Away

I had the pleasure this week of exploring the Flannery O’Connor archives at Emory University, reading through the letters that my favorite writer sent to her mother Regina while attending the Iowa Writers’ Workshop. That pleasure was doubled by the opportunity to attend the monthly Book Club that takes place at Andalusia and is led by Dr. Bruce Gentry of GSCU. As one might imagine, the club discusses one story or another written by O’Connor. This particular Thursday we turned our attention to the winner of the 1957 O’Henry Prize, “Greenleaf.”

In preparing for the meeting, I had printed up a copy of the story from the internet (no use in making my luggage any heavier than it already was) and re-read the piece, making notes throughout the text (Dirt! Chaos! Control!) a day or so before I set foot on Emory’s campus. And while I did make good use of those notes as I contributed to the group discussion, I have to admit that my thoughts were of Regina as I rocked on that famous Andalusia porch.

It’s been coming on for a while, I think, this heart-felt contemplation of Regina, a strong personality who was an independent woman before it was fashionable, someone who knew the sorrow of not only burying her husband (age 45) and daughter (39), but seeing them through the ravages of the illness that took them both. Though I read nary a word written by her (save for one letter scratched on the back of a relative’s letter she was passing on to her daughter), in reading the letters written to her I became, oddly enough, filled with thoughts of the woman Flannery wrote to daily. There were no dates at the top of the letters, only the day of the week, each day following the next as one letter followed the other as predictably as beads on a string. The only exception was written, occasionally, on a Sunday, with Flannery sending a small postcard to say she had nothing to say.

Each page was covered, front and usually back, with long and loopy strokes, in blue ink or in black.

Each note ended with regards to kin, sometimes individually named, and love from the writer to the reader.

She would thank Regina for one thing or another. She would ask Regina for one thing or another. She spoke of money and often noted how much an item cost, whether it was an ice cream pint or a dressy blouse or a special gift for a relative. She spoke of what her teacher had said, and what her roommates had done, and worried over whether she should take a plane or train back home. She summarized, with enthusiasm, what she had eaten that day, a menu dated by midcentury favorites -- Vienna sausages, crushed pineapple -- and jars of her mother’s mayonnaise, the latter a condiment she craved.

And she commented on, or answered, that which Regina had obviously mentioned or asked in her own daily notes that were quite often mailed in pairs, a fact that seemed to annoy Flannery as it disturbed the flow of conversation. For a conversation it was, this back forth between them, this ebb and flow of the mundane, all evidence of a great intimacy that, in time, may have become a little too wearing.

If Facebook had existed then, they surely would have “liked” each other’s statuses.

If texting had been around, we would not have these letters, and that would be a loss to those who come to read them, all these decades later, hungry not so much for the trail of words but the evidence of affection that existed well before O’Connor used her pen to gore an iron-handed woman. 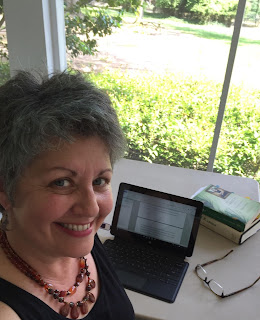 Katheryn Krotzer Laborde is a writer who teaches the craft of writing at Xavier University of Louisiana. Her essay “Hazel Motes is Not Black” is forthcoming in the next issue of The Flannery O’Connor Review.
Posted by Andalusia, Home of Flannery O'Connor at 5/27/2016 03:00:00 PM

Hi Katheryn - this is the Flash Fiction judge from Soul-Making. When I see daily what goes viral on major news shows and it's usually silly like the Chewbacca Mom who got millions of Likes, it's nice to read about a writer's retreat and letters. If we did a street poll in LA or NYC, I bet almost noone would even know who Flannery O'Connor was. They'd probably think she was a missing Kardashian!!!

Just now seeing this! And I can only imagine what O'Connor would have to say about a Kardashian. :>)