A Warm Day at Andalusia

My family talks about the weather. This can be annoying. When my grandparents called my childhood home from Montana, they’d tell my dad about the latest snowstorm or the latest lack of snowstorm, and then my mom, and then my brother and then they’d tell me. My mother’s family in California spoke of droughts; there is a forty-year joke about their desire to steal our Oregonian water. Perhaps it was the bland climate in which I grew up that hid from me the purpose of this ‘weather talk.’ After I moved away, I began to understand weather’s place not only in the construction of our family narrative, but also as a way to connect over great distance.

I’m thinking about weather because I’m thinking about Andalusia Farm, which was hot and bright the summer I visited. Of course Northerners always imagine the South as unbearably hot, oppressively humid, fans spinning uselessly in air that will not cool. It’s even easier to do so from Green Bay, Wisconsin— there are rumors that it might snow tomorrow and my tulips are still blooming. Thinking about the weather at Andalusia, or the picnic hosted there for our “Reconsidering Flannery O’Connor” NEH Summer Institute, evokes over much time and distance the shared experience of a sweaty body that responds to weather. When I think about walking the trails of Andalusia, in long pants to avoid the ticks, or sitting in the parlor, fanning my face with a paperback Mystery and Manners, I can’t help imagining the O’Connors and their visitors doing the same.

O’Connor is not a weather writer. There are no hurricanes like the one Zora Neale Hurston wields in Their Eyes Were Watching God or that leave an aftermath to struggle through as in Jesmyn Ward’s Salvage the Bones. We find none of Melville’s lightning or the much parodied gothic insistence on a stormy heath. No rain of meatballs is ever predicted. Weather so often carries a heavy symbolic weight: fog for confusion, storms for passion or danger, sun for joy and peace. (For a really lovely treatment of weather in literature and art as a way to understand climate, see Alexandra Harris’ Weatherland). Perhaps this easy symbolism is why Mark Twain began The American Claimant with a commitment that no weather would be included in the novel— and then included various weather in an appendix worthy of David Foster Wallace.

Perhaps O’Connor took seriously Twain’s attempt to exclude the weather. A casual dip into O’Connor’s fiction finds few mentions. In The Violent Bear it Away, the sun makes a valiant showing, sometimes “a furious white, edging its way along the tops of trees” (44), often chasing people and animals into the forest or brush— or appearing as part of the biblical prophetic story of the sun standing still. The moon also appears as a menace in this book, though, so it is unclear whether this is weather as much as threatening celestial bodies. In “A Good Man is Hard to Find,” the cloudless, sunless sky is frequently mentioned (and an interpretative puzzle). In “A View of the Woods,” the red sunlight plays an important role, and we get a direct, if brief, discussion of weather from the perspective of Mary Fortune:

The weather was as indifferent as her disposition. The sky did not look as if it were going to rain or as if it were not going to rain. It was unpleasant and gray and the sun had not bothered to come out (The Collected Stories, 349).


While this tells us a bit about Mary Fortune, and perhaps sets up the final scene where the trees, bathed in a blood-like light, take their turn as evocative symbols, O’Connor steadfastly avoids the weather as grand symbol— even as she continuously uses landscapes and horizons. One exception is the early story “The Crop,” which tells the story of a lady-writer longing to write about poverty; she uses the rain heavily, to move the plot (it destroys the titular “crop”), cover up the birth of a baby (delicately implied) and symbolize the relentless poverty of the characters. That O’Connor is mocking this writer may say something about her position on “weather talk” in fiction.

The weather gets more play in her letter-writing, where she does seek connection. It changes behavior; after nine days without sun, “Jack drew a knife on Shot and my mother says it is all the weather.” (The Habit of Being, 245). Sometimes, the peacocks respond to “a little decent weather”-- “mistaking the season, [they] have got their tails up,” (HB, 432). When it was cold, they “came down from the tree in the morning with their tails frozen stiff” (HB, 379). After getting two new swans, she complains that “the weather has been too bad for me to get out and commune with them much” (HB, 566).

Weather kept her indoors from her birds, but also limited her travel, perhaps because of her illness. After a visit north to Chicago, she writes, “[a]nd the weather was revolting.” (HB, 327). When intending to visit Missouri, she asks local Cecil Dawkins: “What will the weather be like there then?... I could come any time this semester but I can’t do anywhere that there is ice on the ground.” (HB, 268). Weather communicates the edges of her experience in her body, something she rarely discusses directly. and (whether her mother is right that weather causes violence) shapes our experiences of the world.

That O’Connor won’t bother with the weather in her fiction reminds us that, despite the vividness of her settings, her fiction is not designed to connect us with our memories of the South. It’s not to orient us to a place or to help us feel our embodiment, but to make ourselves strange and attune us to somewhere else. It’s the opposite of a phone call from your grandmother. Yet, as a correspondent, O’Connor let the place-making work of weather do a bit of its magic. And so, a visit to Andalusia can bring you closer to the O’Connor of her letters, who just might be willing to engage in some weather talk on the covered porch. 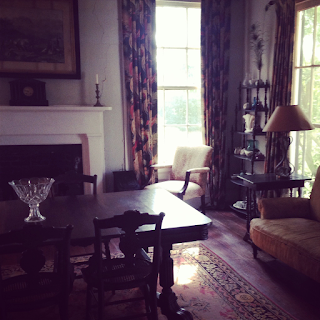 Alison Staudinger is an Assistant Professor of Democracy and Justice Studies at the University of Wisconsin— Green Bay, and a proud alumni of the 2014 “Rediscovering Flannery O’Connor” NEH Summer Institute at Georgia College. She is currently working on a manuscript putting O’Connor and Hannah Arendt in dialogue.