The Transformative Power of Andalusia

When I returned to Georgia last summer I went to Andalusia Farm for the first time. Upon turning off of Highway 441 and driving up to the house I was struck by the beauty and peacefulness of the place as I passed rolling green meadows bordered by meandering paths, punctuated by craggy trees. The two-story white farm house where Flannery O’Connor wrote her sublime stories is gracious and welcoming, with a wide screened-in front porch furnished with rocking chairs.

I was greeted most warmly by Assistant Director of Andalusia, April Moon Carlson, and then went on to view the fashion exhibit where I gained an appreciation for Flannery’s sense of style, and the role of fashion in her own life as well as those of her characters. I also learned a great deal about her relationship with her mother from the recently released letters on display, before stepping out into the back yard to visit the sole peacock in residence, Joy-Hulga. The longer I was there that day, the better I felt.

I grew up in south Georgia, and lived in Baton Rouge and New Orleans, LA for twenty-six years. I now live in Milledgeville, Georgia and visiting Andalusia that day was like a homecoming. It was as though I’d discovered a part of Georgia’s past that’s still very present, one that I’d known existed but didn’t realize I could step into at any time for rejuvenation, tranquility and inspiration, which is both comforting and exciting.

I’ve been to Andalusia again and again since then and each time I feel renewed. There’s a sense of reverence in visiting the home of a great American author, but the relaxed atmosphere on the grounds and at the house makes it a retreat for readers, writers, artists and anyone who appreciates nature, beauty, and the power of imagination. Even if that retreat is just for an afternoon, its effects reverberate for days afterwards.

The high-ceilinged rooms of the farmhouse still contain vases of peacock feathers, drapes chosen by Flannery herself, and the typewriter where characters such as the Misfit, Mrs. Turpin and Hazel Motes were brought to life. Those characters along with many others, real and imaginary, populate Andalusia and this “postage stamp of earth” that Flannery O’Connor called home.

When I attended a supper at Andalusia in the fall with a menu created by a local chef and featuring Georgia-based ingredients, the conversation turned more than once to an awareness of Flannery O’Connor’s presence in the candlelit room, as well as visitors who came to the Farm when she lived here, many of whom would have spent time on the porch waiting for her to complete her morning writing session before she would receive company in that very dining room.

It’s a joy to connect with the spirit of the place, past and present, to feel a sense of connection to Flannery O’Connor and to Georgia’s rich literary heritage: past, present and future.  I’ll be going back soon—hope to see you there! 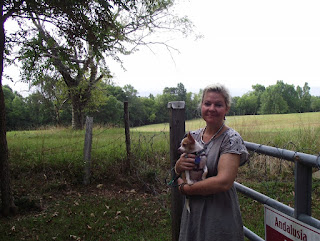 Nevada McPherson lives with her husband Bill and rescue Chihuahua, Mitzi in Milledgeville, Georgia, where she is a professor of Humanities at Georgia Military College. Nevada received a BA in English/ Creative Writing and an MFA in Screenwriting from Louisiana State University-Baton Rouge. For information about Nevada's screenplays, graphic novels and other projects visit www.nevada-mcpherson.com.