Of Birds and Dreams and Flannery O'Connor

We are fortunate to excerpt a passage on O'Connor and Andalusia from Michael Tobias's forthcoming book, Embracing Co-Existence in the Anthropocene, coauthored by Tobias and Jane Gray Morrison and published by Springer Science/Business Publishers of New York. The volume will be available in 2017.

Like Emily Dickinson, who referred to birds 222 times in her poetry1, William Butler Yeats and D. H. Lawrence each immortalized a peacock in their writing, while Krishna Lal, far more recently, devoted a book to the Peacock In Indian Art, Thought and Literature (2006).2 The list of literary ornithological connections goes on in endless iterations, often obscure, but always revelatory. In 2002, at the International Conference on “The Chicken: Its Biological, Social, Cultural, and Industrial History,” convened at Yale University, Karen David, Ph.D., presented her paper, “The Dignity, Beauty, and Abuse of Chickens: As Symbols and in Reality.”3 Like the great dream many of us have harbored of those legendary plains of Cervantes’ La Mancha in Spain where his Don Quixote tilted at windmills, Spain has also engendered other dreams of Andalusia – mountainous, agricultural, abutting the Mediterranean and alive with tango and a vast cultural history. But the other Andalusia, Flannery O’Connor’s family farm in Milledgeville Georgia, where Ms. O’Connor spent more than half of her evanescent life, invites a very different dream, and one that is certainly no wishful thinking: namely, the importance to the artistic spirit in humanity, of birds.

It is a matter of record that Ms. O’Connor surrounded herself with birds, from her childhood in Savannah, continuing that passion at Andalusia where, prior to my own first visit less than two years ago, I had viewed the famed British Pathé News footage with its wonderful fleeting scene of the 5-year old child, O’Connor with two chickens in her arms. “Do You Reverse?”(1932)4 with its vaudeville music track and opening script, “Here’s an odd fowl, that walks backward to go forward so she can look behind to see where she went!” Little wonder that the British news gatherer’s very logo was that of a proud hollering rooster.

I can only imagine the ephemeral joy this piece of footage must have brought all those millions of people suffering during the Great Depression (and about to be plunged in to World War II) who would have likely viewed with a smile the young O’Connor and her cochin Bantam, which adds an uplifting loft to O’Connor’s own oft-cited admission that “I was just there to assist the chicken but it was the high point in my life. Everything since has been an anticlimax."5

After reading Margaret Eby’s “Flannery O’Connor and Her Peacocks”6 it was just a matter of time before I could track down an original copy of O’Connor’s astonishing September 1961 essay “Living With A Peacock” (later re-named “King of the Birds”) in Holiday Magazine7 in which the author describes how that “Pathé man” had managed to stir in her “a passion, a quest. I had to have more and more chickens.”

This astonishing piece of writing is assuredly comparable in many respects, I feel, to Ralph Waldo Emerson’s obituary in The Atlantic Monthly of Henry David Thoreau, published almost precisely 99 years earlier. Both essays8, Emerson’s and O’Connor’s, are among the greatest non-fiction essays on nature written in American history. O’Connor turns her attention to peacocks with that remarkable statement, “Many people, I have found, are con­genitally unable to appreciate the sight of a peacock. Once or twice I have been asked what the peacock is ‘good for’ - a question which gets no answer from me because it deserves none.”9 Near the end of her astonishing Holiday Magazine essay, O’Connor writes, “Lately I have had a recurrent dream: I am five years old and a peacock.” And she subsequently concludes, “I intend to stand firm and let the peacocks multiply, for I am sure that, in the end, the last word will be theirs.”10

As a writer, but also an ecologist, O’Connor’s love of chickens and peacocks add significant weight to the infectious constellation of data I trundle around with when it comes to America’s very different kind of love affair with chickens, and the world’s – with peacocks. The USDA (U.S. Department of Agriculture) “Poultry – Production and Value 2014 Summary, published April 201511 reveals that 104,519,000 chickens were slaughtered in the US in 2014 and this number does not account for the total of approximately 9 billion so called “broiler” chickens slaughtered each year, just in the United States, and an estimated 50 billion worldwide.12

And yes, if you browse the Internet you will also find sites suggestive of the fact that peacocks are also eaten at the dinner table, around the world and in the U.S. One would be ill-advised to even mention such a heresy in India, where the peacock (Pavo cristatus) is the national bird, protected under Section 51 (1-A) of the Wildlife Protection Act of 1972. The bird’s fat and feathers are believed by some within India to cure arthritis but the Government certainly doesn’t buy that and those caught harming the peacock risk six years imprisonment and a 25,000 rupee fine. Peafowl in India are still considered of “Least Concern” under IUCN (International Union for the Conservation of Nature) criteria.13 But the closely related Green Peafowl is “Endangered”; and the Congo Peafowl is listed as “Vulnerable,” as a result of hunting and habitat fragmentation pressures.14

Such data altogether underscores the very brutal truths on so many levels that O’Connor herself mastered in her unique craft and manner of deeply troubling, ironic storytelling.

I had the good fortune to hasten to Andalusia in time to meet Manley Pointer prior to his death one bitterly cold January, and also to read the astonishing 2015 obituary by Kay Powell15 which reminded me of an obituary in Wellington in 1939 of a national celebrity, the wild Airedale terrier, Paddy, who wandered the docks of New Zealand’s capital, keeping company with all of his buddies, the adoring longshoremen and, after his death, the whole nation of New Zealand, that was in mourning for the beloved canine.16 As Kay Powell describes Manley Pointer’s funeral, “News of his death drew 8,000 views on social media. A coterie of young mourners met through social media, dressed in black, and attended the sunset funeral at Andalusia Farm.”17

We know that more than a few peacocks ended up being embalmed in pyramids with Pharaohs. They were worshipped and venerated and painted throughout Ancient Egypt, Syria and the Roman Empire.

When the last Passenger Pigeon, Martha, died in 1914 at the Cincinnati Zoo, she, too was the subject of a funeral, and national news, as well as a sobering centennial documentary. While Audubon painted birds in all their glory, he typically employed dead specimens. No one other than Ms. Flannery O’Connor has ever described a bird – one of her own beloved peacocks –quite like “That rascal [who] could outrun a bus.”18 In my mind, Flannery O'Connor is something of a national environmental hero.

Most recently (late February 2016) I noticed Manley Pointer II enjoying the onslaught of an extremely balmy early Summer, as I would describe it, coming from California, out at lovely, expansive, thought-provoking Andalusia. 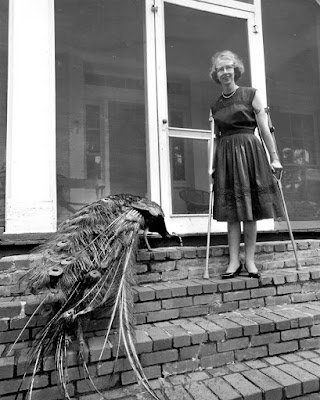