For Bastille Day, we join George Piggford in looking at the O'Connors' pilgrimage to Lourdes.

After spending some time with her friends Sally and Robert Fitzgerald in Italy and visiting Paris, O’Connor traveled with her mother and a group of other Georgia pilgrims to Lourdes. There in 1858 the Virgin Mary reportedly appeared to a young woman named Bernadette Soubirous. The centenary of this event inspired O’Connor’s “Cousin Katie” Semmes to suggest—or really, insist upon—the trip. Her hope was that the healing properties attributed to the waters at the shrine might be beneficial to O’Connor’s worsening health.

Although O’Connor declared in a letter to Elizabeth Hester that “I am one of those people who could die for his religion easier than take a bath for it,” she did make the journey to that holy site, in her own words, “as a pilgrim.” After some resistance and “with bad grace,” she entered the pool in turn with the other malades. She was understandably dismayed by the unsanitary conditions of the common bath, the shared “sack that you take a bath in,” and the “thermos bottle of Lourdes water” passed around from pilgrim to pilgrim that “everybody had a drink out of.”

“Somebody in Paris told me the miracle at Lourdes is that there are no epidemics, and I found this to be the truth,” she later quipped to Elizabeth Bishop; “apparently nobody catches anything.”

After a return to Italy and a special blessing by Pope Pius XII at the Vatican, O’Connor and her mother travelled home to Andalusia. By the end of the year O’Connor reported to Hester that “the trip to Lourdes has effected some improvement in my bones,” which, according to her doctors, “were beginning to recalcify.”

Cousin Katie, who was herself very ill in Savannah, was thrilled to hear of this improvement. Despite O’Connor’s sardonic comments about the pilgrimage, she was herself open to, and suspected that she might have experienced, the power of the miraculous. She added in the same letter to Hester: “Before we went they told me I would never be off the crutches. Since last week I am being allowed to walk around the house without them.”

O’Connor even attributed renewed progress on the novel The Violent Bear It Away to her experience on the pilgrimage. “I am by no means finished,” she wrote to Hester, “but at least I know that it’s possible. I must say I attribute this to Lourdes more than the recalcifying bone. Anyway it means more to me.” Certainly the European trip reinvigorated her body, at least temporarily, as well as her literary imagination.

Although I have never been to Lourdes, like O’Connor I have travelled as a pilgrim to Rome and the Vatican, on the occasion of the 2009 International Flannery O’Connor Conference at the Pontifical University of the Holy Cross. But the closest I’ve come to a visit similar to O’Connor’s at Lourdes was my first trip to Milledgeville and Andalusia ten years ago.

My first stop in Milledgeville was at Memory Hill Cemetery and O’Connor’s flat stone grave. Some visitors leave peacock feathers or flowers. I brought a rosary made of Jerusalem stone and draped it on the tablet, near the “IHS” (for Iesus Salvator Hominum, Jesus, Savior of Men). I prayed for the repose of O’Connor’s soul, and of her father’s and mother’s, and I asked Flannery to pray for me.

I then drove through the heart of Milledgeville and to the property of Andalusia. Like many before me, I wasn’t sure what to expect, other than a wooden farmhouse and some fields and trees. I had been praying for a renewal in my academic work, a new direction and a new start, and this desire inspired the visit. I wanted, like many, to gain a better sense of the world that formed O’Connor’s imagination and her writing.

After pulling my car behind the house, I wandered around the backyard a bit, came up to the front door, opened it, and entered. It struck me as a simple place, frankly in need of some repair. The most fascinating room, to the left of the entrance, was roped off and contained an enticing bookcase filled with various volumes from O’Connor’s own library. The crutches, too, were there—not hundreds as at Lourdes. Just one aluminum pair.

Craig Amason, who was then director of the property, greeted me warmly. I purchased a couple of O’Connor books, the latest issue of The Flannery O’Connor Review, and a bumper sticker that declares in the words of Hazel Motes, “No man with a good car needs to be justified.”

Still, that visit was in its own way transformative. I discovered then a new subject for my literary criticism and a new, powerful enthusiasm. As a Catholic I feel close to O’Connor, as one can to the souls who have gone before us, to all the departed and to the Communion of Saints. As I write about her work and think about her life, I intuit a deeper connection to O’Connor as a fellow believer and as someone who is both dead and still, mysteriously, alive.

I am certain that I am not the only one who perceives Andalusia to be, if not quite a shrine, a holy place where God was loved and suffering was endured, and, yes, where witty comments were made amidst many moments of grace. 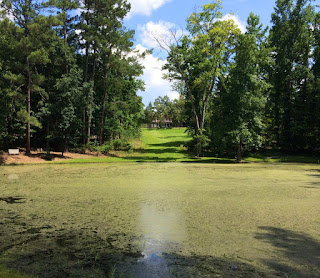 George Piggford, C.S.C., is a Catholic priest and Associate Professor of English at Stonehill College in Easton, MA. His “Mrs. May’s Dark Night in Flannery O’Connor’s ‘Greenleaf’” appears in Christianity and Literature.
Posted by Andalusia, Home of Flannery O'Connor at 7/14/2017 03:00:00 PM