Holding the Hand that Rocks the Cradle

While we tend to focus on Flannery in this space and at the farm, today is a good occasion to appreciate a different resident of Andalusia’s Main House, Regina Cline O’Connor. Much like her daughter, Regina was a lady of many talents. In my mind’s eye, I see her changing in the blink of an eye from a hard-charging and determined businesswoman to a skilled hostess to a dutiful caretaker for a sickened daughter.

The preceding is not to say, of course, that their relationship didn’t have its problems. For Flannery, I’m sure that being called home from a “writerly” sort of life in and around New York City for medical reasons frustrated her immensely; her movement from Milledgeville to the Fitzgeralds’ home in Connecticut was several years in the making, of course, beginning with her first move to Iowa and then to Saratoga Springs, NY, and the Yaddo writers’ colony. Flannery’s lupus diagnosis proved a quick end to her time away from home. That kind of drastic change in lifestyle was bound to create some tension, but, like any good relationship, they no doubt found themselves good complements for one another.

Art needs patrons, and Flannery had one in her mother. In The Habit of Being, Flannery had her doubts that Regina understood the full import of her fiction, but in that farm life Regina facilitated, Flannery found inspiration for the fiction. So too, in refining her works and her inner being by welcoming the local intelligentsia, Flannery needed a hostess—not just someone to offer a drink and a snack, but someone to make that house a more welcoming place. Regina fit the bill very well, and though Flannery might have put a couple wry comments around the “hostessing” act, I imagine she appreciated Regina’s welcoming those visitors in the midst of her daily duties on the farm.

Regina’s handiwork is still evident at Andalusia, of course. The curtains in the front two rooms are the results of her talents as a seamstress. Indeed, our exhibition last year concerning Mid-20th Century fashions focused a great deal on Regina’s talents at sewing. Meanwhile, I am sure that running a dairy farm and keeping its books was no easy task.

Thus, on Mother’s Day, the rest of the staff and I thank all of our mothers for bringing us into the world. I always tell our guests from my hometown’s part of Georgia that we’d all best act right, lest someone see us and get word back to our mothers. That’s partially a joke—somewhere, sometime, someone’s going to know Mom. My “joke” is also a wish that we live in such a way as to make self-evident our Mom’s contribution to our characters. 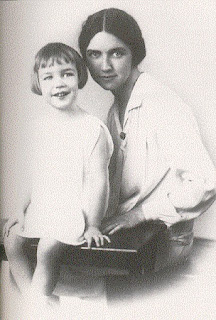