Bluegrass 2016: Mixing the Local and Literary

Concerning last weekend’s Bluegrass Festival, I can only offer gratitude to those who came together to put on the event. One needs only to look at numbers to realize the success of their efforts and this year’s concert. Before the first band, Good Country People, even took the stage, we had broken attendance records. By the time the Skilletlickers gave way to Packway Handle, the record for attendance had almost been doubled: over 1200 people (performers, attendees, volunteers, vendors, staff, and Bon Vivants) piled onto Andalusia’s grounds.

The festivities did not have to wait until 5:00, either. Amateur musicians brought their guitars, fiddles, dulcimers, even flutes and saws for ad hoc performances on the Hill House porch. I particularly enjoyed an “I’ll Fly Away” with our friend Andy Adams, who has lent his talents to our stage at previous festivals and to the local theatre troupe. Melanie Devore led a pair of trail walks, and those who had not yet wandered around the farm came to a new appreciation of what we have to offer other than literary pilgrimages.

What the Bluegrass Festival offers, more than anything, is what the museum world calls a chance to make “friends.” The people who attend the Festival tend to be from close by Milledgeville and are, usually, infrequent visitors to the farm. The concert marks a fairly rare opportunity for those newcomers and the dyed-in-the-wool Flannery and Andalusia fans from all over the country to mingle a little bit. The folks who live here get a chance to present their town to visitors from all over the country, and Milledgeville is far richer place for it, I wager.

I’m not sure if Flannery would enthusiastically receive the banjos and fiddles, given the unanimity of classical music in her record collection, but I bet she’d be more than pleased to see such a number of people contributing to the preservation of her homeplace. With more friends (and neighbors, at that), keeping this place alive and well becomes, if not easier, more of a certainty. 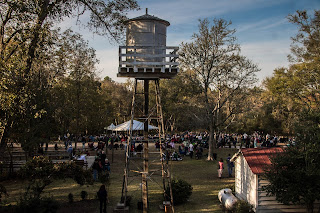 Daniel Wilkinson, Bon Vivant, served as the Master of Ceremonies at the three most recent Bluegrass Festivals.
Posted by Andalusia, Home of Flannery O'Connor at 11/11/2016 03:00:00 PM