Any visitor to Andalusia in the past couple of weeks could tell: Spring has sprung. The first two weeks of March saw comfortable temperatures and the accompanying changes of attire and attitude.  The blooms and fresh scents are equally as satisfying as turning off the furnace and putting the sweaters away.  March also brings with it, however, a rather sulfuric shade of yellow to cover the outdoors. Those of us who cannot abide pollen had their two weeks of fun; now it's back inside, lest we need the whole pharmacopeia to keep ourselves on two feet. The birds, too, are feeling the effects of warmer weather; Manley II has taken to spreading his tailfeathers for visitors and staff alike (though Joy/Hulga doesn’t cotton to his behavior and will peck at him for his insolence).  In any case, these days of Spring are important to the spirit; there’s new growth outside, and the best of us take the cue from nature and bring our better selves out, as well.

I think Flannery was well aware of nature’s effect on the human spirit. O.E. Parker had his epiphany beside a tree, and Joy/Hulga’s enduring image of Manley Pointer will be his running off through the fields.  Indeed, even the terrible scenes at the end of “A Good Man Is Hard to Find” are tempered somewhat by their taking place away from civilization.  There are others still who are unprepared to take on the outdoors, such as Mrs. May in “Greenleaf.”

Thus, these days of Spring bring Andalusia and the fiction into sharper relief, far more so than the days in winter where I am forced off of the porch and must place myself next to the heaters, or in summer where the heat is such that any place except directly under the attic fan is far too hot. I usually tell visitors who have not read much of the fiction to grab one of our reading copies and head to the Hill House porch to read “Good Country People” in eyeshot of the infamous barn and hayloft. Perhaps I should offer “Parker’s Back” or “Greenleaf” instead, stories whose characters are deeply invested in the outdoors.  (I leave to our social media friends to remind me of further stories that deal directly with nature.)

I am reminded of how good things are as visitors and friends share with me what conditions they are stepping away from, even for a little while; a Colorado friend, for example, passed along pictures of his parka and snowy backyard earlier in the week. We invite you to partake in all the trappings of Spring out at the farm—flowers, cool weather, and birds both real and drawn (our new art exhibit opens on April 9).  There will be extra hours to do so to boot on Thursdays beginning April 7, when we will be open until sunset daily.  Further, third Thursdays will be Thursdalusia, in which the new Nail House pavilion will be put through its paces with music, storytelling, and more.  The staff no doubt will be taking advantage of this time of year, too, except for one; the Bon Vivant needs a decongestant and a hot tea. 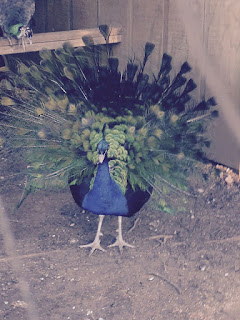 Daniel Wilkinson is a Visitor Services Assistant and Bon Vivant at Andalusia. His springtime hobbies include tending to the flowers behind the Brown-Stetson-Sanford House in downtown Milledgeville, singing Easter choral music, and playing golf very poorly.