On the Other Side of the Gate: A Shift in Vision

I am an old timer. I first went to Milledgeville and the O’Connor Collection in 1973 or 1974, forty plus years ago. I was writing a dissertation at the University of South Carolina on Flannery O’Connor’s kinship with the 19th-century American romance writers. Carless, I took a greyhound bus from Columbia, SC, to Milledgeville. I spent an intense week reading manuscripts, talking with then curator Gerald Becham and Sarah Gordon, and, each day after the Collection closed, walking the Georgia College campus and surrounding downtown and residential neighborhoods. Multiple times I passed by the Green St. house hoping for a glimpse of Regina and walked to O’Connor’s grave in Memory Hill Cemetery. But not having a car precluded my seeking out Andalusia. But dependent upon public transportation, I did have an unanticipated bonus the day I left: I do believe I met some of the prototypes of O’Connor’s characters on a Friday afternoon when we sat together in the bus station, they going on weekend furlongs from the then still functioning mental hospital, I returning to Columbia to teach summer school in order to get through the summer financially.

When I landed a tenure-track job at Converse College in 1976 (dissertation still unfinished), I trashed my bicycle and bought a car. My next trip to Milledgeville was in 1977 in that car. I did numerous drive-bys of the Andalusia lane on this trip and on subsequent trips before the Andalusia Foundation was formed and the house and grounds opened to the public. Sometimes I parked across 441 or pulled off of the southbound lane a hundred yards or so from the lane and walked back to the locked gate and no trespassing sign. I had heard a number of tales of trespassers encountering a uniformed guard appearing out of nowhere, so I never climbed over the gate, but rather merely rested my hands on its bars and peered through up the sandy lane. I must have looked like an F. Scott Fitzgerald character, nose pressed against the glass, longing for the rich society life he couldn’t have. In my case, I was separated by a farm gate and longing for something I couldn’t name, didn’t—and perhaps still don’t—really understand. What drew me back repeatedly? What was it that I thought I’d have or learn by walking up that lane to Andalusia?

When first Sarah Gordon and then Elizabeth Wylie asked me to write something for this Andalusia blog, I had no idea what I would write. In fact, non-techie that I am, I didn’t know there was such a blog. Their request, however, got me thinking about what four decades ago I hoped to find beyond that gate I so consistently returned to. Was it a kinship between O’Connor’s 19th-century farm house and the white clapboard 1880’s farm house in Virginia that I had grown up in? Did I think architectural similarities somehow might grant me some special insight to a writer I had loved since 1969 when I had first read her—all of her fiction—in one week for an honors seminar my senior year in college. Was it idle curiosity? Was it my 1960’s spirit of wanting to defy a no trespassing sign.

Once the house and grounds were opened to the public by the Foundation, my visits to Andalusia accompanying occasional research trips to the manuscript collections, attendance at O’Connor conferences in Milledgeville, and teaching stints at the two NEH summer seminars yielded no answers. In fact, once allowed beyond the gate, I found I no longer felt an obsessive need to be at Andalusia. I certainly did, however, enjoy strolling through the woods and fields; walking around the dilapidated farm buildings (and now graciously the completed and on-going restoration of a few) and associating them with the layout of some of the stories; eating figs from a bush that O’Connor likely ate from; standing in the house and seeing rooms and items I had previously known only from published photographs. I confess I picked up my share of rocks, one of which now sits in the center of a birdbath in my home in northeast Arkansas. While I saw some other visitors pull healthy iris rhizomes from large clumps in need of division and replanting, I lifted two small rhizomes that had been repeatedly mowed over and took them to Arkansas where I have restored them to health. I bought my share of memorabilia and have enjoyed sharing cards and refrigerator magnets over the years. I have regularly contributed financially to the restoration of the farm buildings, the upkeep of the house, and the return of the peacocks—may Mary Grace and Manley Pointer rest in peace, and may the surviving hen, I forget her name, not get new companions until the pen is secure from weasels and large enough to accommodate multiple occupants.

I will likely return in September to the 2015 O’Connor conference and spend time at Andalusia. That time will, of course, evoke O’Connor for me, but perhaps more importantly it will be time spent with other O’Connor scholars and friends from across the country who relish O’Connor’s work as much as I. We will debate new books and essays, quiz each other about what we might know about the Sessions’ manuscript or about any new gifts to the Emory or the GC & SU collections, and tell stories about our latest joys of reading and teaching O’Connor. We will talk about our own on-going work and our families and pets, and we will determine what upcoming conference we might see each other at in the near future. Whether next on the lawn of Andalusia again or in a bar in San Francisco, we will slide back into the same comfortable conversations, among people the large majority of whom have never set foot in one another’s home towns, much less their living rooms. What bonds us is not place nor even, I think, O’Connor’s person or home. Rather it is her art and thought that has made each of us see, as she and Conrad would say. That vision has changed us. I hope for the better.

My birds use their Andalusia rock as a secure perch in a deep birth bath. I am getting ready to dig and separate my Andalusia iris, giving them a new home under a nicely thriving ginkgo tree. I love my abstract watercolor of three peacock feathers painted by a Georgia College art instructor and won by me in a silent auction in 2001 by shutting down competitors with a bid of $666. No one dared touch that! I unquestionably hope the Foundation continues to receive monies necessary to restore Andalusia as a historical literary gem that will attract visitors and consequently increase O’Connor’s readership. But I don’t need any of these material things. Whatever I thought I needed in 1974 when I literally longed to climb the gate to Andalusia could not possibly have been more formative, delightful, and terrifying than the daily awareness of O’Connor’s work that has increasingly become a part of me since I first read her in 1969. At the slightest provocation, her one-liners jump into my head; people or things I see or hear around me recall scenes from her fiction; and skies and tree lines can even evoke her whole canon.

The one tangible thing I do need I have intentionally hung by my mirror in my bathroom: a framed note-card reproduction of Martha Dilliard’s painting “Revelation.” (If you don’t know it, you can find it online.) It depicts abstractly some olds hogs lying in a sty, and Ruby and Claude—and theirs and my kind—trailing the hordes through the sky presumably to heaven. Seeing this image first thing every morning unfailingly makes me laugh and reminds me that the slap of reality that hit Ruby in the doctor’s office was not just for her, but rather for me and you and all of O’Connor’s readers who grasp her eternal crossroads. There is no pig parlor at Andalusia. It is, however, a place where a great mind and imagination accomplished much of her greatest work. 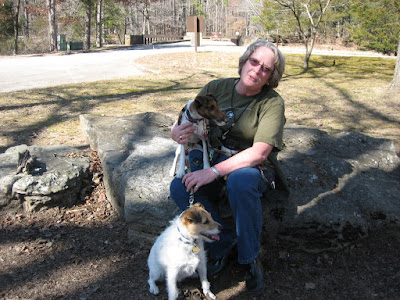 --Virginia Wray began her career at Converse College before becoming a member of the founding faculty at the Louisiana School for Math Science and the Arts. She then moved to Lyon College (previously Arkansas College) where she taught English for 25 years. She then served as VP for Academic Services and Dean of Faculty at Lyon for 5 years, retiring in July 2015. She currently serves on the Scholars Council of the Flannery-O'Connor-Andalusia Foundation.