Each day the eye finds fresh fare,
filling the homely bowl
of routine with slivers of light
and shade so that even the cracks
in the plaster are crooked roads
to somewhere:
A car shudders up
the dusty drive, cadenced
voices pass the time of day
in the familiar dance,
gauging their moves, a bow,
a do-si-do around the corners
of the room, as glasses perspire
onto the tabletop, a door shuts.
A boy or a man or just a figure
in the distance climbs
onto the sloping back
of a mule. Somebody brings
news that won’t wait the telling,
that doesn’t bear repeating
but will be repeated,
somebody’s mouth a long O,
agape, agape, a love feast.
The bloody sun burns low
enough to set the woods on fire,
one arm grazes another
that doesn’t want to be touched.
A plate of slightly rotting fruit
rests on the dining room table,
ink-smeared fingers endlessly
turn the pages of the newspaper
or carefully place the rosary
in the bureau drawer.
A former tenant visits,
he doesn’t want to leave,
he stands for a long time
in the middle of the yard
running his fingers through
his greasy hair, clearing
his throat, repeating himself.
The tops of trees are silvered
by an antique light.
For a moment a peafowl
stands on one leg
on the roof of the barn,
a live weather vane,
another fans himself
in the front yard.
Nobody notices.
A window slams shut.
The hired man’s children
in the back of the car
swat each other with comic books.
Is that smoke on the horizon,
do you smell it, no, well then.
A meal is served, nobody speaks.
Outside, it’s early evening,
the bats lilt through the air
as though they are beautiful.
They are small black doors
into the dark. 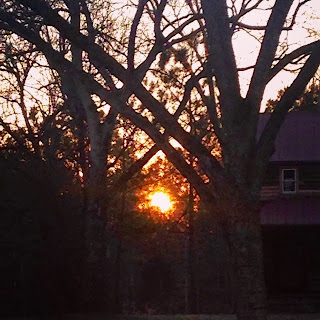 -- Sarah Gordon, founding editor of the Flannery O'Connor Review, is the author of Flannery O'Connor: The Obedient Imagination and A Literary Guide to Flannery O'Connor's Georgia. Gordon organized Georgia College and State University's extensive collection O'Connor manuscripts. *This poem won the Ron Rash Poetry Prize sponsored by Broad River Review in 2010 and was published in the journal that year. It has also appeared in Georgia Poetry (Texas Review Press 2013) and is forthcoming in Georgia Poetry (Negative Capability Press 2015).