One day last August, as I stood on the veranda at Andalusia, I was caught in a moment that is best described in two words: empathy and affinity.

I am a storyteller by trade, and when I discovered my affinity for Flannery O’Connor’s work—both her fiction prose and her letters and lectures—I began to do what people like me do. I began to plan a performance. I studied Flannery for a year, sinking into her writing and into several of the most recent and most well read biographies (including Ann Napolitano’s O’Connor-inspired and O’Connor-filled fiction piece A Good Hard Look) because I was interested in doing a one-woman show about her life. I studied Flannery’s voice. I spent a lot of time thinking about who she was. I did what actors know is the work of empathy. I crawled into her skin, as best I could, and tried to see what she must have seen and feel what I think she must have felt. I am sure I was and am wrong about more than half of it. If I were Flannery, I would want a great deal about myself to remain a mystery. However, I think I began to “get” her.

So I stood on the veranda that August Sunday morning, thinking about peacocks and letters to friends, about physical pain and eternal interior peace. And I really did feel like I was in the same space as Flannery.

To be sure, I was still left with a lot of mystery, which indeed seemed appropriate. I was visiting the farm with my brother and his partner. I teach at an Evangelical Christian college which even that summer found itself embroiled in the current Christian debate over homosexuality. That debate has wreaked havoc on my family, and continues to do so even now. So I stood there, watching Ted and Nic amble about the place, thinking about how much I love them and how I wished there were things I could understand better. I wished I knew what people really fear, and what God really wants, and if maybe just maybe God isn’t bigger than we give Him credit for.

I thought about Flannery’s friendships, especially with Betty Hester and Maryat Lee, both of whom were gay. She told the former, “I can see now how very much grace you have really been given and that is all that is necessary for me to know in the matter,” and said the knowledge that Hester was gay didn’t make the “slightest bit of difference” in her opinion, which was “based on respect.” Flannery did take into account other forces: the opinion of her mother, whom she said, “lives in a world Jane Austen would feel comfortable in” and the struggle she found herself constantly embroiled in between religiosity, artificial religious language, and the reality of the Incarnation of Christ. “I doubtless hate pious language worse than you do because I believe in the realities it hides,” she told Lee. The real item on the table for every person was what they did with the knowledge of the Incarnation. The rest was just semantics. In this, I find my affinity with Flannery to be incredibly strong. The more of her thoughts I read, the more I nod in agreement with them. Debates and pundits rage. Flannery pounded out sincerity and a knowledge of holy Love from a typewriter in a musty room in Georgia. That I understand.

So I stood, taking in Flannery’s world and thinking about what it must have been like to be her. I thought about the workings of a dairy farm, since I grew up on one in Michigan. I thought about approaching situations with a keen observant eye and quick wit that can only be appreciated by folks of a particular strange strain. About how she said “You shall know the truth and the truth shall make you odd,” and how much that sounded like my own Christian experience. I thought about strange birds, misfits, and the people who seem on the fringes of polite society and how I would rather be with them, observing and “cherishing the world at the same time [I] struggle with it” than anywhere else. That place is a place where God dwells although (perhaps because?) mystery remains. Empathy and affinity: that was my view from the veranda at Andalusia. It felt like home. 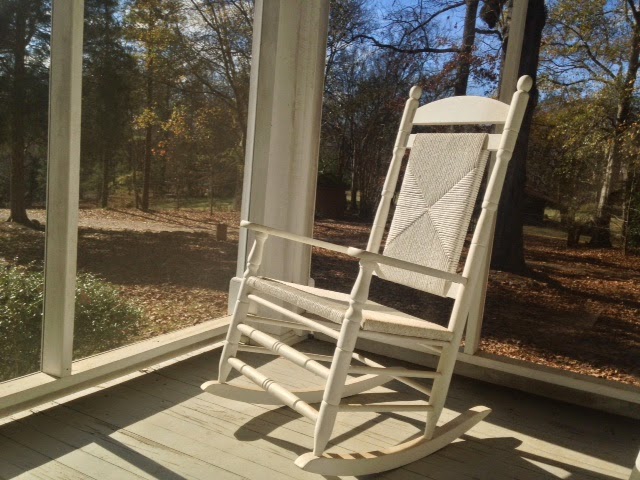 --Jen Letherer, MFA, teaches theater and media studies at Spring Arbor University. She is the author of Remote Virtue: A Christian Guide to Intentional Media Viewing and The New Female Archetypes: Rethinking Women's Roles in Groups Through Television. Learn more at www.jenletherer.com.