“With One Eye Squinted”: Thanksgiving in the Wake of Flannery O’Connor and Ferguson


It seems fitting to begin this set of ruminations on Thanksgiving and Flannery O’Connor with the quotation placed on Flannery O’Connor’s plaque in the American Poet’s Corner in St. John the Divine (where our own Institute’s Fr. George Piggford spoke earlier this fall):  “I can with one eye squinted take it all as a blessing.”  Certainly one would need “one eye squinted” to find the proper vision for O’Connor to view her devastating illness as a “blessing.” It is, as all who have read and studied O’Connor learn, such a vision that allowed her—and us, by extension—to understand how the very burdens life requires us to endure offer us opportunities to experience what Longinus called the “sublime”:  moments of beauty that always carry with them the imminent possibility of destruction and dissolution of the self.

For me, personally, it has been a year of grievous losses and new opportunities, and I find it difficult, perhaps impossible, to separate one from the other.  In May, a close relative ended her life after battling Alzheimer’s disease for almost five years—a battle never won in a medical sense, needless to say.  At the same time, another close friend’s spouse of fifty years went into a coma lasting a week, from which we thought he would not return—and today he is conscious, with no loss of mental acuity, and working through the kinds of physical therapies and treatments O’Connor herself knew only too well.  One student of mine is finally able to have surgery to correct a painful condition with which he has lived since birth—and we all wished him well as he began this journey; another student came to class bereft because a close high school friend, scheduled to graduate from college in December, had gone off into the woods the previous weekend and shot himself (thanks to the lax gun sales laws of neighboring Pennsylvania):  his “stranger,” certainly not his friend, spoke to him, as indeed a similar one spoke to Francis Marion Tarwater in The Violent Bear It Away.

I have just returned this week from the annual convention of the National Communication Association, my scholarly and professional home, several days of celebrating our hundredth anniversary, while also looking into the future.  One of the programs was a memorial panel dedicated to the legacy of the great Mary Frances HopKins of Louisiana State University, whose own almost decade long co-existence with cancer ended about a year ago. Professor HopKins was a dedicated performer and scholar of O’Connor, well-known for her solo performances from O’Connor’s fiction and for a two-person performance of “Everything That Rises Must Converge.”  At her memorial, her close affinity for the spiritual and intellectual O’Connor was often cited (and napkins with peacocks adorning them given as souvenirs of the event).  I think O’Connor would have viewed HopKins as the anti-Hulga:  the academic woman who integrated faith, understanding, and human love in every conscious moment of her life.  It was a life well-lived, the only squinting required for the final years of her illness, which she endured with—one can only call it—grace. And  I saw my own former student, now a full-time college instructor, on his way to tenure, but also moving through his own stations of the cross, as he continues to experience ongoing effects of thyroid cancer in his late-twenties.

And then to return to the verdict of the grand jury in Ferguson.  Whatever each of our own private opinions of the outcome of the grand jury’s deliberations, no doubt we can all agree that it takes a “heap o’” squinting to find the blessing in any moment of the entire sequence of events, from the fatal moment of encounter between the young black man and the uniformed white officer to the last few days of chaos, anger, protest, and, yes, violence in that town in Missouri and across our country. Would O’Connor herself have a sardonic laugh—tempered by righteous anger and deep pain, no doubt—for the fact that this happened in a town that seems to span the North and the South? Would she, once again, remind those of us who live above the Mason-Dixon line that we do not have clean hands in the ongoing history of racial violence about which O’Connor wrote in her own, inimitable ways? She would grieve for the parents, friends, and family of Michael Brown; pray for the souls of the townsfolk (and we are all, by extension, citizens of that Nineveh); and find what is, once again, an opportunity for us to discover God’s grace in that whole narrative.  I confess, if there is any of God’s grace in it, I have yet to find it myself.

But we do not need to squint to take the life and work of Flannery O’Connor as a blessing. And certainly foremost among the blessings with which (in which?) I have been living in the last half of this year has been the opportunity to learn from my fellow readers and scholars of O’Connor, to understand the incarnate “mystery” and “manners” of her achievements I had struggled to know, and to thank whatever powers that may be for Andalusia and the world for which it stands as a microcosm. 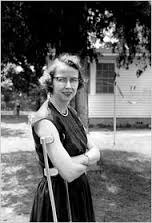 --Bruce Henderson is Professor of Communication Studies at Ithaca College, where he has taught the performance of literature, rhetoric, disability studies, and queer studies for twenty-seven years.  He is a past-editor of Text and Performance Quarterly and current editor of Disability Studies Quarterly, and co-author/co-editor of three books; he was a 2011 recipient of the Lilla A. Heston Award for Outstanding Scholarship in Interpretation and Performance Studies from the National Communication Association.  He attended the 2014 NEH Institute on “Reconsidering Flannery O’Connor” at Georgia College and State University, and is beginning a project tentatively titled The Crip-Haunted South: Disability in American Southern Fiction.  He may be contacted at henderso@ithaca.edu.