Every building has a story to tell

This week's blog is an excerpt of an article about the state’s oldest Catholic church, the Church of the Purification of the Blessed Virgin Mary, in Sharon, Georgia. By Suzanne Haugh and published October 24, 2013 in The Georgia Bulletin, the official newspaper of the Archdiocese of Atlanta, the article is excerpted here with their kind permission. Andalusia Farm finds kinship with fellow preservationists who, like we, understand that every building has a story to tell. The main farm house at Andalusia tells stories of Flannery O'Connor's residence here with her mother, Regina Cline O'Connor,  and the 13 other structures on site are ghosts of a once bustling farm, the inspiration for so many of Flannery's stories. Interestingly, when the church was located in Locust Grove, Georgia, its parishioners included the Harty family.  Church archives also indicate that an infant member of the Treanor family is buried in its graveyard.  Those families were forebearers of Flannery O'Connor.  The Flannery O'Connor - Andalusia Foundation applauds the efforts of the Friends of Purification Church to raise funds for restoration of the historic church. You can read the full article online here http://www.georgiabulletin.org/news/2013/10/sharon-church-listed-as-historic-place-in-peril/. Learn more about the project at  http://savepurificationchurch.com.

The first lay Catholics to reach Georgia in 1790 tamed the wilderness in what is now called Taliaferro County. Without a concerted effort to preserve their historical footprints, the wilderness will reclaim that territory, as well as its important significance to Catholics and to state history.

Fortunately, the situation of the state’s oldest Catholic church, the Church of the Purification of the Blessed Virgin Mary, in Sharon, is now in the spotlight.

The Georgia Trust for Historic Preservation has placed the white wood-framed church on its 2014 “Places in Peril” list. The announcement that the church was added to the list was made Oct. 22.
The church, along with nearby Locust Grove Cemetery, the oldest Catholic cemetery in Georgia, are part of what has been dubbed “the cradle of Catholicism in the South.”

“Imagine, the first Catholics literally settled in the middle of nowhere, built their homes, planted their crops, remembered their faith. It was pioneering in the true sense of the word. It’s really a very special place,” said Bill deGolian, a board member of Friends of the Purification Church, which applied to receive the special designation.

Kate Ryan, director of preservation of the Georgia Trust, said by email that the organization “provides additional assistance to our Places in Peril sites and works closely with sites and their identified local partner groups.”

“Each site faces its own unique challenges,” she said, but this support includes increased publicity, technical assistance on preservation and restoration issues, long-term planning for site restoration and maintenance, organizing volunteer workdays, facilitating meetings, writing letters of support and assisting with grant applications.

The list includes 10 “Places in Peril,” all of which are already designated national or state historic sites. To qualify there must be a serious threat to their survival and a demonstrated level of community commitment and support for their preservation.

DeGolian noted that the designation does not “impose requirements or control over what the archdiocese does in the restoration, although it is understood that the intent is to restore the church in a historically accurate way.”

At the same time, those interested in the preservation project must continue their own efforts to garner more funds to rehabilitate the landmark.

Friends of the Purification Church is working to complete a three-phase development plan, with project costs for the first phase to run an estimated $300,000 to $350,000. The high cost comes after news that the structure’s foundation “is not adequate for the weight of the building.”
Every building has stories to tell. If the walls of Purification Church could talk, they would fill a history book dating back to 1790 when pioneering Catholics—English families followed by the Irish and French—settled in nearby Locust Grove in then Wilkes County (not to be confused with a Henry County town of the same name).

A resident of Atlanta, deGolian and his wife, BJ, have had a second home for over five years in Washington, 13 miles from Sharon. Bill deGolian often drove past the dilapidated Sharon church, not stopping to read the marker that would have revealed its history.

“Georgia is full of old churches in rural areas. … I would have thought that the first Catholic church would have been in Savannah or Augusta,” he said. “Catholicism wasn’t really tolerated in Georgia at first; they outlawed papists.”

He has since become fascinated with the area’s history. After the Revolutionary War, Georgia’s Constitution guaranteed freedom of religion for Catholics, too, he said.

“The area here was known to be good cropland,” deGolian said. “So much of Georgia was Indian territory, but in 1785 the Indians began to move a little west. This was the first part of Georgia that was settled.”

A small group of Catholics from the first U.S. diocese, in Baltimore, Md., moved to what would be called Locust Grove, fashioning a humble church. This remote area in Georgia was considered a mission of the Baltimore Diocese. Eventually the early Catholics outgrew this simple church, which was dismantled and relocated to a different spot in 1821 near the Locust Grove Cemetery. The new church was named Church of the Purification of the Blessed Virgin Mary. In 1826, Locust Grove was at its peak but yellow fever came, as did many Protestants to the fertile soil. The arrival of the railroad to Sharon caused a migration of folks away from Locust Grove resulting in the relocation of Purification Church in 1877 to Sharon.

The white church that is standing on the site now dates back to 1883. It is a station church of St. Joseph Church in Washington, meaning that it no longer serves an active faith community. But the legacy of the Catholic families who worshipped there is still felt, most recently as the archdiocese received the bequest of the Margaret Mitchell family, whose maternal ancestors belonged to Purification Church.

Father Vincent Sullivan, pastor of St. Joseph Church, wouldn’t necessarily consider himself a history buff, but when it comes to Purification Church and the area’s historical roots, he’s hooked.
Father Sullivan’s vision for the project is to create a pilgrimage site for visitors to the area as well as a place for retreats—even hosting destination weddings with accommodations and facilities available in nearby Washington.

An obstacle is the location of Purification Church and other nearby historical points of interest, which are in a remote part of Georgia. Unfortunately the local economy has been stagnant for decades since the area stopped growing cotton due in part to the boll weevil, making it difficult to raise funds in the depressed area.“We’ve got to give people a reason to come to this heritage site,” deGolian said.

He and his wife are dedicated to the church’s preservation. “It’s an intriguing place that has quite a long history of Catholicism in a part of Georgia where there are not many Catholics now.”
He is concerned that this significant area of history could slip away without intervention.

“Just look at the building; it’s falling apart. When I looked more into its past I gained an understanding that it’s not just important to Catholics but to others in Georgia; there’s a lot of history,” he said, citing such historical details as the fact that the first settlers referred to the area as “Mary Land.”

“Our immediate focus is to save the church building; there’s awful sloping,” he said, referring to the “most immediate” task of stabilizing the church’s foundation. With adequate funding, the extent of the project would also include such tasks as adding bathroom facilities and moving the handicapped entrance to preserve the building’s entrance and original footprint. Painting and cleaning up the exterior and plantings are also on the list and may be work that Scout or youth groups may wish to undertake.

“I’m very pleased (the Georgia Historic Trust) selected Purification. I believe it will help highlight the significance of the site but also that it is in trouble and needs to be noticed.”
He hopes the message reaches Georgia’s Catholics, but also those interested in historical preservation.

“This is so important for Catholics in Georgia. We’re not looking to just restore a building. We’ve got to have the future mapped out and have a use for it. … We’ve got to give people a reason to come, by making it a heritage site, a retreat center and provide all that is needed for that. … It’s so quiet, so pastoral.” 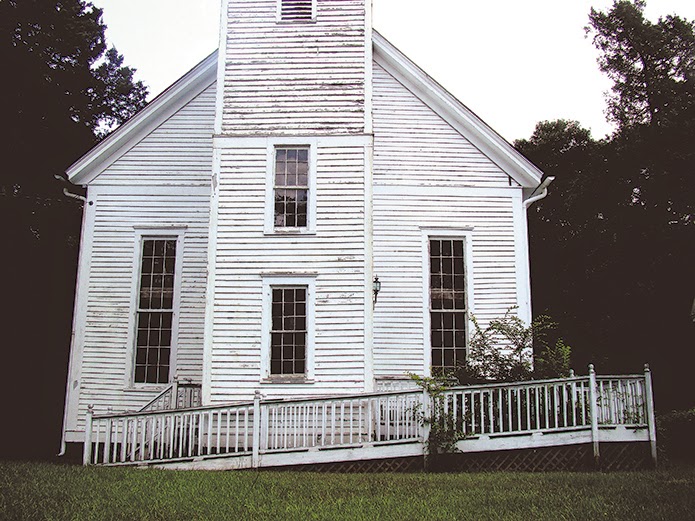